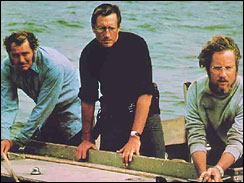 Yes, there was a certain something about that haunting soundtrack which really freaked out me - and the rest of the United States - watching the movie "Jaws" the first time. (It wasn't happenstance that beaches across the United States also reported lighter-than-usual traffic that summer of 1975.)

Turns out that a film score like the one Steven Spielberg incorporated for his blockbuster movie actually mimic animal cries, or what scientists term "nonlinear vocalizations," according to a study just published in the journal Biology Letters.

"By their very nature, vocalizations containing nonlinearities may sound harsh and are somewhat unpredictable," the study found.

The researchers tested whether film soundtracks could evoke similar emotions in a range of film genres. They came up with the perhaps unsurprising conclusion that Hollywood film-makers since D.W. Griffith have known: Sound tracks can manipulate human emotions.