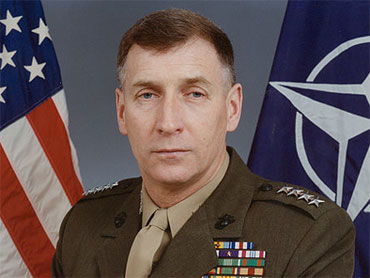 A retired American general who caused an uproar in the Netherlands by suggesting gay Dutch soldiers were partly to blame for the Srebrenica massacre by Serb soldiers in Bosnia has apologized for his remark.

The Dutch Defense Ministry has released an e-mail from retired Gen. Paul Sheehan to retired Dutch Gen. Henk van den Breemen saying he is sorry for his statements to the Senate Armed Services Committee on March 18.

Sheehan was opposing a proposal to allow gays to serve openly in the U.S. military.

In the e-mail seen Tuesday by The Associated Press, Sheehan said the 1995 murder of some 8,000 Muslim men in Bosnia's Srebrenica enclave "was in no way the fault of individual soldiers."

At the March 18 hearing Sheehan claimed that Dutch military leaders had called the presence of gay soldiers in the army "part of the problem" that allowed Serb forces to overrun the Srebrenica enclave in Bosnia in July 1995 and kill some 8,000 Muslim men.

Dutch troops were serving in the undermanned U.N. peacekeeping force in Srebrenica when they were overrun by heavily armed Serb forces, who went on to turn the surrounding countryside into killing fields littered with mass graves.

Sheehan, a former NATO commander who retired from the military 1997, was speaking in opposition to a proposal to allow gays to serve openly in the U.S. military.