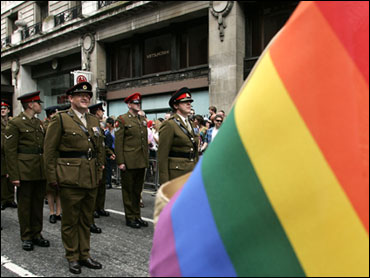 A retired U.S. general says Dutch troops failed to defend against the 1995 genocide in the Bosnian war because the army was weakened, partly because it included openly gay soldiers.

The comment by John Sheehan, a former NATO commander who retired from the military 1997, shocked some at a Senate Armed Services Committee, where Sheehan spoke in opposition to a proposal to allow gays to serve openly in the U.S. military. Committee Chairman Sen. Carl Levin told Sheehan he was "totally off-target."

Sheehan said European militaries deteriorated after the collapse of the Soviet Union and focused on peacekeeping because "they did not believe the Germans were going to attack again or the Soviets were coming back."

Belgium, Luxembourg, the Netherlands and other nations believed there was no longer a need for an active combat capability in the militaries, he said. "They declared a peace dividend and made a conscious effort to socialize their military - that includes the unionization of their militaries, it includes open homosexuality."

Dutch troops serving as U.N. peacekeepers and tasked with defending the town of Srebrenica in 1995 were an example of a force that became ill-equipped for war.

"The battalion was understrength, poorly led, and the Serbs came into town, handcuffed the soldiers to the telephone poles, marched the Muslims off, and executed them," Sheehan said.

"That was the largest massacre in Europe since World War II," he said of the killing of some 8,000 Bosnian Muslim boys and men after Serbian forces captured the town.

Levin, D-Mich., appeared incredulous. "Did the Dutch leaders tell you it (the fall of Srebrenica) was because there were gay soldiers there?" he asked.

"Yes," Sheehan said. "They included that as part of the problem." He said the former chief of staff of the Dutch army had told him.

More on Gays in the Military

Military to Review Sodomy Ban
Military's Study on Gay Ban Biased?
Support for Gays in the Military Depends on the Question

Levin said it may be the case that some militaries have focused on peacekeeping to the detriment of their war-fighting skills.

"But I think that any effort to connect that failure on the part of the Dutch to the fact that they have homosexuals, or did allow homosexuals, I think is totally off-target," said Levin, a proponent of ending restrictions on gays serving in the U.S. armed forces.

"The Dutch military, as you point out, were peacekeepers and not peace-enforcers. I agree with that," said Levin. "But what the heck that has to do with the issue before us is what mystifies me."