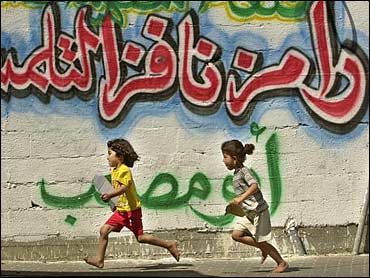 A Palestinian political scientist who released a survey showing the "right of return" to Israel is not that important to most Palestinians was roughed up by an angry mob for releasing the poll's results.

The surprising survey shows that only 10 percent of Palestinian refugees would want to rebuild their former homes under Israeli rule, reports CBS News Correspondent Robert Berger. The findings seem to contradict a key Palestinian demand that millions of refugees be allowed to return. Israel believes that would lead to its destruction.

Dr. Khalil Shikaki, the director of the Palestinian Center for Policy and Survey Research, said the approximately 200 rioters were hijacking his news conference as a signal to Palestinian prime minister Mahmoud Abbas.

"They are trying to send a message that the right of return is sacred, and that you who are negotiating are on notice," said Shikaki, who is a refugee himself.

During the attack, Dr. Shikaki locked himself in his office. After trying to break down the door and wall, some in the crowd smashed a window onto the balcony, then broke through the window into his office. He was struck, shoved and pelted with eggs but not seriously injured. No one was armed, he said.

He has been threatened in the past by both Yasser Arafat and Hamas. After the riot, the protesters marched to Arafat's compound a few blocks away, where he met with them, although it is not known if he was aware of the disturbance in Shikaki's office.

Although the group distributed press releases with the letterhead of the Palestine Liberation Organization, that group said it had no connection with the mob. However, a spokesman did say the PLO disagreed with Shikaki's findings.

"We don't believe that it reflects the reality and the position of the refugees," Saji Salameh told The New York Times.

Meanwhile, Arafat remains at the center of the latest dispute between Israel and the Palestinians.

Abbas has issued a new demand to Israel: he wants Arafat to be released from confinement — despite the fact that the two leaders have not spoken to each other since Abbas threatened to resign last week.

Israel has placed Arafat under virtual house arrest in his battered West Bank headquarters, because it sees him as an arch-terrorist. Berger reports there is no chance Israel will allow Arafat to leave Ramallah and get the red carpet treatment in world capitals.

In fact, Prime Minister Ariel Sharon was in London, where he was to urge Britain to cut all ties with Arafat.

"Arafat should be removed from any position of influence," Sharon told an American network, blaming the longtime Palestinian leader for the nearly three years of Mideast bloodshed.

Arafat has been confined to his office building for more than a year and a half, watching as Israeli forces knocked down almost all the buildings in the compound. Israel's policy now is that Arafat is free to leave, but Israel will not guarantee that he would be allowed to return.

The United States backs Israel's attempt to boycott the embattled Palestinian leader, but European countries retain some ties with Arafat. A delegation of British lawmakers visited his Ramallah headquarters on the weekend, and Russian Foreign Minister Rigor Ivan met with him on Sunday, urging Israel to restore Arafat's freedom of movement.

Also Monday, an Israeli is believed to have been kidnapped by Palestinian militants, and in a rare sign of cooperation, Palestinian police have joined the search for the missing Israeli.

It's believed the missing taxi driver has been abducted by Palestinian militants in the West Bank, despite a truce declared by terrorist groups.

"We expect the Palestinian Authority to take measures against those extremists in order to bring back the Israeli taxi driver to his family," Israeli Foreign Minister Silvan Shalom said.

Representatives of Palestinian prisoners jailed by Israel also called for the of the taxi driver.

Israel officials have suggested that they are looking for ways to ease the prisoner crisis, and the statement by the prisoners was viewed as a gesture of good faith.

Orit Messer-Harel, spokeswoman for Israel's prison service, said the statement was released on Sunday by prisoner representative committees at the Ashkelon and Shatah prisons, which together contain hundreds of Palestinian inmates.

"We allowed the dissemination of this call because it helps peace," she said.

The statement calls for the release of 61-year-old Eliyahu Goral, whose cab was found abandoned and idling in an Arab section of Jerusalem on Friday.

Palestinian Minister for Prisoner Affairs Hisham Abdal Raziq said the statement "confirms the prisoners' belief that such actions (as kidnapping) only hurt the issue of releasing prisoners," and also "confirms the firm commitment that prisoners have to abiding by the cease-fire agreement."

At the same time, the Palestinian Authority has taken a first step to implement its key commitment under the U.S.-backed peace plan.

"The new Palestinian leadership still has to prove that it has made a strategic decision to abandon violence," said Shalom.

Abdel Aziz Rantisi, a top Hamas leader, warned Monday that attempts to disarm the group would scupper the truce.

"People are taking sides," political scientist Shikaki said. "The accusations are flying, and no one is being civil."