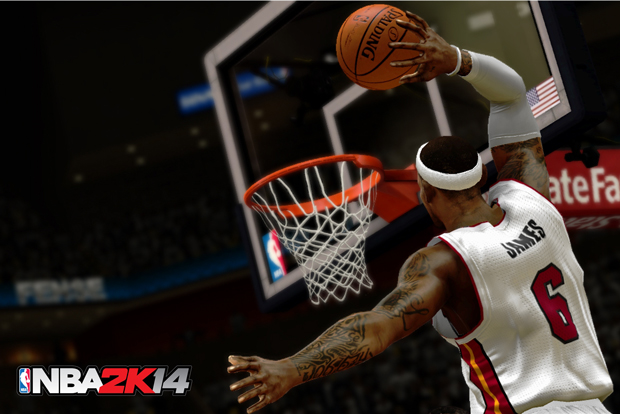 (CBS News) Few series have had as much success as the NBA 2K franchise has enjoyed this console generation. It has been lauded as one of the most faithful recreations, nailing the little things like few sports franchises have done. With this console generation giving way to the next, 2K sports looks to further cement its reputation as the go-to NBA simulation. Its latest entry in the series - NBA 2k14 - adds a new mode, brings back a heavily requested one and further enhances the gameplay that has become its bread and butter. But with the developers preparing a next-gen version of 2K14, is the current-gen release a worthy upgrade?

2K Sports landed LeBron James as its cover athlete for 2K14, and the developers leveraged LeBron James' involvement. With James about to become a free agent again this summer if he chooses to opt out of his current deal, 2K Sports thought it would be a great time for you to choose where The King's next destination should be. But you don't have total freedom in this mode. You can select to stay with the Heat or select a "Fantastic Journey," which has LeBron bolting the Heat but you can't decide where he goes next. In my experience, LeBron chose to go with the Knicks, but I've seen other scenarios where he's chosen to return to the Cavs.

In Path to Greatness, you step in LeBron's shoes and play key games during this season with the Heat. During these games, there goals to attain or obstacles to overcome. For example, one game both of the Heat's point guards are injured, tasking LeBron to play point guard. You are graded after each matchup, providing some replay value for those who want to ace each contest. But the scoring system isn't very clear. When I was asked to play point with LeBron, I finished with 30 points 30 assists (tying an NBA record) and 12 rebounds, but was awarded only two out of three stars. It's fun to be in the driver's seat of LeBron's career and provides a bit of a story to follow in a genre that rarely offers it.

But the mode would be nothing without solid gameplay, and the NBA 2K series has never struggled with that. The developers have said they added 3,000 new animations, and it's evident immediately. There's a level of physicality that the series has needed that has been added this year. Contact around the rim has been beefed up, providing yet another level of realism the series has always strived for. The blocking system has been overhauled, allowing for more highlight rejections. Defense has also been amped up on the perimeter, making it more difficult to get to the paint.

But don't think offense was neglected. Passes feel much more crisp, and the players space the floor better. This combination opens up the drive-and-kick game, a staple for most NBA offenses. The zippier passes help offensive players hit open teammates quicker, providing more of a window to get off a clean look. 2K has added layer after layer of gameplay tweaks over the years and 2K14 is the culmination of that. The three-man booth of Kevin Harlan, Steve Kerr and Clark Kellogg returns and calls the action impeccably. They mix in numerous anecdotes about players, coaches and executives while also staying on top of the on-court action. But there is some jarring commentary about Gatorade that feels more like an ad than in-depth analysis, which pulls you out of the experience since real broadcasts shy away from such antics.

The ever-popular My Player returns, allowing you to create a player and follow every step of his career. The mode hasn't received any major upgrades, so if you've been a fan of previous iterations you'll be very familiar with what 2K14 has to offer. The customization is just as deep as ever and the RPG elements are as addictive as previous years, but there's not a standout new feature.

But longtime followers will be happy to know that Crew mode is back. This mode allows you to create an online team that's constituted of My Players. This mode has been absent the past two years to improve online connectivity issues, which the developers have shored up during that time (Though I could not test the connection for 2K14 because so few people had the game at the time of this review). You can name your squad, choose a logo and create color combinations for your home and away jerseys. The developers also added stat tracking and leaderboards, which should add another level of competitiveness to the mode. There are also three-man and five-man teams, depending on how many players you can recruit.

The developers have made some tweaks to My Team mode, which made its debut in NBA 2K13. My Team allows you to build a team from scratch by using in-game currency, which can be spent on buying packs of cards which contain players, signature skills, coaches, etc. that are broken up by tiers (bronze, silver, gold, sapphire). Just like Crew mode, you can customize numerous aspects of your team and take it online to face other players. In 2K14, the developers added tournaments that will have certain parameters (such as playing with only bronze players). You can also pit your team against an NBA team's real schedule to see how it stacks up.

Though NBA 2K14 doesn't makes any drastic changes, it does improve nearly every aspect from 2K13 to create gameplay that is unrivaled. The physicality in the paint and on the perimeter is a welcome change that really changes the way the game is played. Though the LeBron Path to Greatness mode doesn't give you the freedom that you would want, it is an experiment that players who crave something other than the nuts and bolts of an NBA season should enjoy. The return of Crew mode is much anticipated by veterans of the series and something they will spend countless hours playing. The developers have fleshed out My Team, adding depth and leaderboards that were sorely lacking from 2K13's version. NBA 2K13 is rated E for everyone and will be released on PlayStation 3, Xbox 360 and PC on Oct. 1. The next-gen versions are slated for Nov. 15 for PlayStation 4 and Nov. 29 for Xbox One.