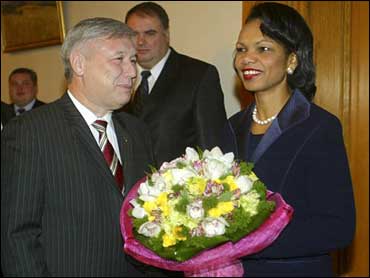 Secretary of State Condoleezza Rice sought Wednesday to clarify U.S. policy on harsh interrogation methods, saying no U.S. personnel may use cruel or degrading practices at home or abroad.

Rice's remarks followed confusion in the United States over whether CIA employees could use means otherwise off limits for U.S. personnel.

It also follows strong and sustained criticism in Europe over techniques such as waterboarding, in which prisoners are strapped to a plank and dunked in water.

"As a matter of U.S. policy," Rice said the United Nations Convention against Torture "extends to U.S. personnel wherever they are, whether they are in the U.S. or outside the U.S."

The U.N. treaty also prohibits treatment that doesn't meet the legal definition of torture, including many practices that human rights organizations say were used routinely at the U.S. military prison camp at Guantanamo Bay, Cuba.

The Bush administration has previously said the ban on cruel, inhumane and degrading treatment did not apply to Americans working overseas. In practice, that meant CIA employees could use methods in overseas prisons that would not be allowed in the United States.

Human rights organizations and critics in Europe have called that a loophole for treatment almost indistinguishable from torture. Prisoners suspected of links to terrorism have been chained to the floors of their cells, denied sleep and led to believe they could be killed.

Rice's five-day European trip has been dominated so far by allegations of secret CIA prisons in Europe and the U.S. treatment of terror suspects in those facilities. Her statements Wednesday reflect ongoing tensions between the White House, Congress and the State and Defense departments over the treatment of detainees.

House and Senate negotiators are expected to include a ban on cruel, inhuman and degrading treatment of foreign terrorism suspects in a final defense bill. The White House has threatened to veto any bill containing such a ban, but President Bush's national security adviser, Stephen Hadley, has been negotiating with its chief sponsor, Sen. John McCain, R-Ariz., to find a compromise.

Rice said U.S. diplomats have told Putin they are concerned about the restrictions.

The secretary of state spoke during a press conference Wednesday with Ukrainian President Viktor Yushchenko in his nation's capital, Kiev. Rice's visit was intended, in part, to bolster Yushchenko a year after he came to power in a popular revolution.

Yushchenko said that they discussed energy projects that U.S. companies might participate in, as well as joint efforts to combat bird flu. Ukraine recorded its first case of bird flu on Saturday.

He said that Ukraine is looking forward to the visit next year of the head of NASA, saying it should lead to the signing of an agreement on air and space cooperation.

Yushchenko said he and Rice also discussed "common views on what Ukraine has managed to do on speeding up its" admission to the World Trade Organization. He said the two discussed technical issues pertaining to Ukraine's WTO ambitions and "we hope that the American side will take a positive view."

CBS News correspondent Mark Phillips reports the U.S. has been accused by human rights groups of transporting detainees to secret prison camps, including one at a remote Soviet-era airbase in Romania. Rice, while denying the torture, effectively confirmed that the camps do exist, and that foreign governments know about and benefit from them

"That cooperation is a two-way street. We share intelligence that has helped protect European countries from attack, helping save European lives," Rice said Tuesday.

The accusers have been gathering evidence from eyewitness sightings and air-traffic logs. They say hundreds of planes, said to be operated by CIA cover companies, have been transporting suspected terrorists around Europe in so-called rendition flights, so the detainees could be interrogated and perhaps tortured for information.

Rice's torture denial has not satisfied the critics.

The U.S. may have hoped to diffuse a hot political issue, but Rice can expect to hear about torture and prison camp allegations on her trip all week. The administration says its treatment of detainees may be distasteful to some, but it's not illegal, and they say, it's necessary.