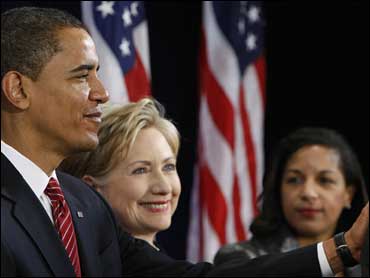 Secretary of State Condoleezza Rice and designated successor Hillary Rodham Clinton have met and broken bread for the first time since the former first lady was tapped to become America's next top diplomat.

Rice and Clinton - who will be country's third female secretary of state after she is confirmed by the Senate - first met in the 1990s when Mrs. Clinton brought her daughter, Chelsea, for a visit to Stanford University where Rice was the provost. The pair have had a cordial relationship since and Rice has said she believes Clinton will make a great secretary of state.

Clinton and potential U.N. envoy Susan Rice, whose post Obama will elevate to a cabinet position, separately visited the agency's headquarters in Washington's Foggy Bottom neighborhood on Monday, according to officials familiar with the transition.

Those officials said Rice wants to install her own transition team inside the State Department, but that was denied by the Obama team and aides to Clinton.

"Sen. Clinton has great respect for the ambassador-designate and looks forward to working with her," said Kiki McLean, a spokeswoman for the senator.

Obama transition spokeswoman Brooke Anderson said: "Decisions about confirmation and agency review teams were made by the Obama-Biden transition. Given that the U.S. mission to the U.N. is supported by the State Department, it makes perfect sense that our nominee would have an office to use for preparations and meetings there as part of the transition process."

In announcing Rice's and Clinton's nominations last week, Obama said he wants Rice to play a more significant role in foreign policy than some previous U.N. envoys, most of whom have not been members of the president's cabinet.

"As in previous administrations, the U.N. ambassador will serve as a member of my cabinet and integral member of my team," Obama said.

There is already a small Obama agency review team at the U.N., and the officials said incoming U.N. ambassadors rarely have transition staff at the State Department because the job is based in New York.

State Department officials declined to comment on issues related to the transition.

It was not clear if Clinton and Rice - who had strained relations during the Democratic primaries because of Rice's steadfast backing of Obama - saw each other at the State Department on Monday, as Clinton left the building shortly after Rice arrived.

During the presidential campaign, some Clinton aides saw Rice's early decision to back Obama as a betrayal because of her previous role as a senior State Department official during President Bill Clinton's administration.

Technically, the job of U.N. envoy falls under the authority of the secretary of state, although some previous U.N. ambassadors have held Cabinet rank. The last U.N. ambassador to be part of the president's Cabinet was Richard Holbrooke, who had a famously icy relationship with then-Secretary of State Madeleine Albright during the Clinton administration.

Albright, who was President Clinton's first ambassador to the United Nations, was a mentor to Rice. But the two had a falling out when Albright, America's first female secretary of state, lined up behind Hillary Clinton for the Democratic presidential nomination and Rice backed Obama.