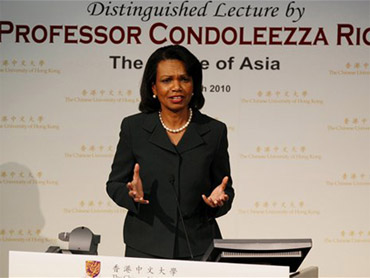 Former U.S. Secretary of State Condoleezza Rice said Friday she would "many times over liberate" Iraq again, but she regretted the Bush administration failed to work closer with Iraqis to rebuild the war-torn country.

Rice, speaking at the Chinese University of Hong Kong, said she believed history would eventually vindicate many of the decisions made during the presidency of George W. Bush.

"I would many times over liberate Iraq again from Saddam Hussein," Rice said. "I think he was a danger to the Middle East."

However, she suggested the U.S. government failed to understand "how broken Iraq was as a society" and should have focused its rebuilding efforts outside of Baghdad, the capital.

"We tried to rebuild Iraq from Baghdad out, and we really should have rebuilt Iraq from outside Baghdad in," she said.

"We should have worked with the tribes, worked in the provinces," she said, adding that smaller projects should have been favored over big ones.

"That's something that in retrospect that we finally got right" several years after the 2003 invasion. "And it's one reason I think Iraq has a chance."

Rice served Bush as national security adviser and later as America's chief diplomat. She now is a senior fellow at the Hoover Institution public policy research group at Stanford University.

She is en route to the Chinese island of Hainan for the Boao Forum, an annual conference where executives hobnob with global leaders, early next month.