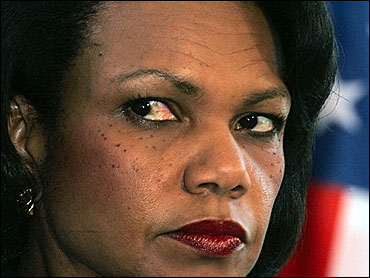 Secretary of State Condoleezza Rice is now the public face of the George W. Bush administration's promise to play by the world's rules when it comes to fighting terrorism. So if they're broken, her credibility abroad, and perhaps at home, could be at stake.

Throughout Europe, there is suspicion and anger over reports of secret CIA interrogation centers and transport flights for suspected terrorists. It explains why Rice, during her trip to Europe last week, tapped some of the good will she has built up over nearly a year of intensive travel and outreach.

Rice met with government leaders nervous about what the United States may be doing on European soil. The Europeans also were aware that their constituents often take a dim view of the administration's policies on human rights and civil liberties.

At a NATO meeting Thursday, European leaders said Rice satisfied many of their concerns, even as several officials made plain their continued disagreement with Washington.

Rice assured allies that the United States does not condone or practice torture or interrogation practices that look very much like torture. She said no European airport or airspace was used to move suspected terrorists to places where they might be tortured.

Rice may be the only U.S. figure who could, as NATO Secretary-General Jaap De Hoop Scheffer said, clear the air in Europe. She used her first overseas trip as secretary, in February, to court Europeans angered by the U.S.-led invasion of Iraq and mistrustful of her boss, Mr. Bush.

That and other work paid off as European leaders offered polite support for Rice last week, even if backing from the public and press in Europe was in question.

Europeans are as skeptical as they were two years ago, or perhaps more so because of the CIA reports, said Robin Niblett, director of the Europe Program at the Center for Strategic and International Studies in Washington. Their distaste for Mr. Bush and Vice President Cheney has not abated, he said.

"I think her personal credibility has been tarnished or at least blended in with the negative impressions that they have of the president and vice president," Niblett said.

To get a sense of the level of mistrust of U.S. intentions, consider that it took the chief U.S. diplomat to state what sounds basic to Americans, for example, that U.S. policy is to abide by international treaties and U.S. laws.

It is also unusual for the secretary of state to be the voice of public voice for policies carried out by the military, CIA and the Justice Department.

Yet Rice had no real choice.

"In this case it became a topic of great interest in Europe, so it became in part a foreign policy issue with which she had to deal," State Department spokesman Sean McCormack said. "Part of her job is to speak about U.S. obligations and how we comply."

Neither he nor Rice directly answered whether Rice's stock would fall with her counterparts if there were other incidents such as the abuse of detainees at the Abu Ghraib prison in Iraq.

"Will there be abuses of policy? That is entirely possible," Rice said at a NATO press conference Thursday. "Just because you are a democracy, it doesn't mean that you're perfect."

She pledged investigations and punishments if there were violations, and said democracies such as the United States are obliged to live by the rules they set for others.

The Bush administration refused to confirm or deny the existence of such prisons, and tried to ignore the story at home even as it mushroomed in Europe. It took a month before the administration would acknowledge the outcry and address it.

Rice is the most popular member of the Bush administration, polls show. A Pew Research survey in October found that 60 percent of respondents held either a very favorable or mostly favorable view of her, while 25 percent had a very or mostly unfavorable view.

Rice is sometimes mentioned as a Republican candidate for president in 2008, but she says she has never wanted to run for office.

In an AP-Ipsos poll, Mr. Bush improved his job approval rating from 37 percent in November to 42 percent now, though his standing with the public remains relatively low. Fifty-seven percent still disapprove, down from 61.

"Europe's foreign ministers rolled over, stuck their paws in the air and allowed Ms. Rice to tickle their stomachs," she wrote.

She noted De Hoop Scheffer's assertion that "you will not see this discussion continuing."

"To which the only reasonable response should be: Why on earth not?" Dejevsky asked.
By Anne Gearan