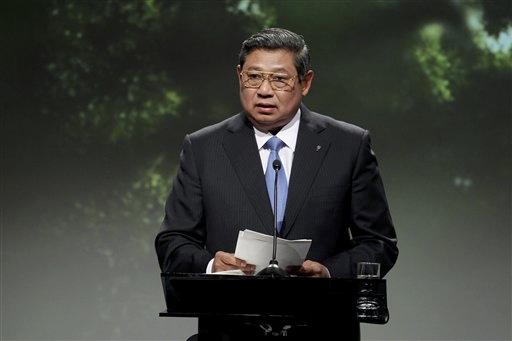 An agency monitoring the aid will be up and running before U.N. climate talks start in Cancun, Mexico, later this year, the European Union's climate commissioner said at a conference on deforestation in Oslo.

Also, Indonesia agreed to a two-year moratorium on issuing new permits for forest destruction as part of a $1 billion deal with Norway that would pay Indonesia a fixed sum per ton of CO2 emissions reduced through rain forest preservation. Norway has had a similar deal with Brazil since the mid-1990s.

Deforestation, the burning of woodlands or the rotting of felled trees, is thought to account for up to 20 percent of carbon dioxide released into the atmosphere - as much as is emitted by all the world's cars, trucks, trains, planes and ships combined.

The new program - called REDD Plus, for Reducing Emissions from Deforestation and Degradation - will encourage rich nations to voluntarily finance forest-protecting projects while coordinating that aid to avoid waste and ensure transparency.

It was approved - but not implemented - at the U.N. climate talks in Copenhagen, Denmark, in December.

In Oslo, Germany, France, Norway, the U.S., Britain, Australia and Japan pledged $4 billion to finance REDD Plus through 2012, with Denmark and Sweden adding $73 million more to the effort on Thursday.

The new monitoring agency would oversee individual agreements between countries to fight deforestation and educate local populations who live off forests - estimated at more than 1 billion worldwide - to do so in a sustainable way.

EU climate commissioner Connie Hedegaard said the new agency, and a comprehensive database that will help streamline aid combating deforestation, were tangible results that would build momentum in climate talks ahead of the Cancun summit.

Indonesia's President Susilo Bambang Yudhoyono said the new agency would "decrease a trust deficit" that has stymied progress in wider climate talks, as wealthy countries express concern about how aid money is used in poor nations.

"Forests are worth more dead than alive. Today we commit to change that equation," said Norwegian Prime Minister Jens Stoltenberg, who was co-chairing the conference with the Indonesia president.

A political agreement at the U.N. climate summit in Copenhagen last year called for warming to be kept from rising more than 2 degrees Celsius (3.6 Fahrenheit) above pre-industrial levels by 2020 - which scientists say could trigger a climate catastrophe. But the Copenhagen conference disappointed many in failing to produce a legally binding deal for countries to limit emissions.

Thursday's meeting was the last on REDD Plus planned before Cancun, with work now starting on establishing the agency's infrastructure.

"In this period of increased stringency, governments will need to know that every dollar made available will be spent wisely in order to avoid any unnecessary duplication," he said in a speech.

While the $4 billion is only two-thirds of the $6 billion Brazilian Environment Minister Carlos Minc said he hoped would be in place by the Oslo conference, environmentalists said it was a good start for the fledgling program.

"For early phases, the kind of money we're talking about is probably sufficient," said Mark Tercek, the head of U.S. conservation group the Nature Conservancy.

Greenpeace welcomed the pledges of financing but warned that it remains unclear how the funds will be spent.

The funding so far comes exclusively from government budgets, and Stoltenberg called for "voluntary contributions" from private sector and industry players. He also said that ultimately "the most important source of money will be carbon pricing" - from carbon trading and carbon taxation schemes.

About 32 million acres (13 million hectares) of forests are cut down each year - an area about the size of England or New York state - and the emissions generated are comparable to those of China and the United States, according to the independent U.K. Eliasch Review on forest loss.