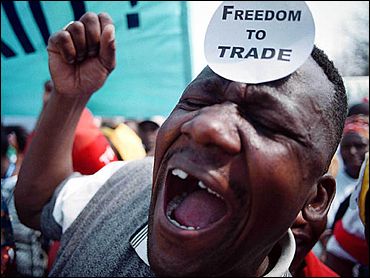 The United States showcased public-private partnerships Thursday at the Earth Summit, promoting a range of projects meant to combat poverty but which critics say often do more for big business than the poor.

Delegates at the 10-day meeting in Johannesburg, meanwhile, were deadlocked on tough issues including poor nations' calls for rich countries to phase out farm subsidies even though 95 percent of a 77-page draft plan of action had been agreed.

As part of their debate on the world's economic progress, delegates at the World Summit on Sustainable Development are discussing how gender issues affect poverty.

Women toil in most of the world's fields, yet many do not own the land they work.

"Empowering women guarantees more of the desired results for children, and if you believe children are the future for sustainable development...then this is an important thing," said Remi Paris, a poverty reduction expert for the Organization for Economic Cooperation and Development.

President Bush, who has chosen not to join about 100 other world leaders for the summit finale early next week, is a leading proponent of partnerships, also favored by other rich nations from the European Union to Japan.

Environmentalists say partnerships, meant to involve local communities, companies and other groups, may let business cash in on providing essential services like water or electricity, while letting governments shirk their responsibilities.

U.N. organizers said they had received notice of 218 proposed partnerships, in areas ranging from healthcare to renewable energy projects to help meet summit goals of halving poverty by 2015 without poisoning the planet in the process.

"We are very excited about partnerships...We see this as a commitment on the part of all," said Paula Dobriansky, U.S. Undersecretary of State for Global Affairs. "This is a call for action. This is a call for initiative."

Among U.S. projects will be one to expand efforts to protect Congo basin forests in central Africa with an additional $53 million over four years. Another multi-nation project will get $43 million to provide energy for poor communities.

Activists say rich nations are trumpeting partnerships at the World Summit on Sustainable Development to cover up a lack of new government funds or clear timetables for an assault on everything from AIDS to a lack of clean water supplies.

"(Governments) are supposed to be working up an action plan with targets and timetables and the means of implementation," said Greenpeace climate policy director Steve Sawyer. "We can talk about partnerships after they've done that."

Friends of the Earth said privatization of water supplies in nations from Bolivia to the Philippines had meant higher prices for poor people. Nearly one in five people or 1.1 billion of the population have no access to clean drinking water.

Meanwhile, South Africa sought to defuse a looming clash with activists by approving all 17 protest marches planned on Saturday to the summit venue in a gleaming conference center close to some of Johannesburg's worst slums.

Safety and Security Minister Charles Nqakula said the government had hammered out a compromise in talks Wednesday and expected about 20,000 people to march for causes ranging from jobs to land.

Police used stun grenades to disperse a small crowd of demonstrators Saturday in downtown Johannesburg and have pledged to crack down hard after protests and violence disrupted other international gatherings from Seattle to Genoa.

With talks, meanwhile, stalled on issues like phasing out farm subsides, the 95 percent of the text of a plan of implementation covered the least controversial elements.

U.S. demands that good governance and democracy should be a counterpart for aid handouts, calls for multinational companies to be held accountable for their actions around the world and debate on the benefits of "globalization" were also unresolved.

British Environment Minister Michael Meacher said ministers might have to get involved in breaking deadlock among senior officials but predicted the summit would end with a deal.

"I don't believe that there are any fundamental, absolute sticking points," he told Reuters.

"I think it will be resolved but probably only through the shaping of the final packages...There are still differences over targets, governance, human rights and the social dimension."

Many delegates said the United States was leading resistance to any new targets going beyond a world trade deal struck in Doha last year to phase out export subsidies and to make "substantial reductions in trade-distorting domestic support."

Farm subsidies in rich nations total about $300 billion a year, or nearly six times the West's aid payments to poor states. The poor states say that the subsidies shut out their exports ranging from textiles to bananas.

By one World Bank official's estimate, state subsidies paid for a cow in a rich nation are about three times the average earnings of the poorest people on the planet.