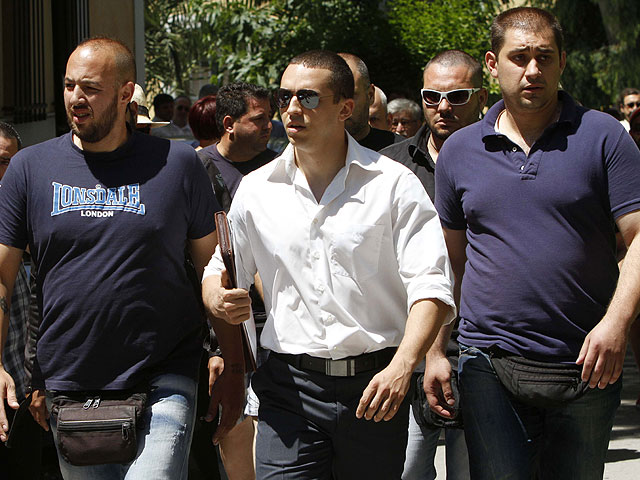 (AP) ATHENS, Greece - The spokesman for Greece's extreme-right Golden Dawn party, who caused uproar last week by slapping one female politician and throwing a glass of water on another on live TV, sued the two women Monday as well as the television channel that hosted the news show.

Authorities had issued an arrest warrant for Kasidiaris after he threw water over Dourou and then slapped Kanelli hard three times across the face during a heated political discussion Thursday on Antenna.

Under Greek law, an arrest warrant for a misdemeanor must be carried out by midnight the day after the act has occurred, in which case the case goes straight into a trial. If the suspect is not apprehended within that time frame, the case turns into a judicial procedure in which a trial date is set, often for several months or even years later. One has not yet been set for Kasidiaris.

Kasidiaris laid low immediately after the incident, but resurfaced Sunday evening at the opening of a Golden Dawn office in Athens.

Kasidiaris argues he was provoked by insults during Thursday's television show and that the 58-year-old Kanelli hit him first with a newspaper.

Moments after Kasidiaris hit Kanelli, the channel cut to a commercial break and when the program resumed, Kasidiaris was no longer there. Attempts were made to hold him in a room in the station's building while the police were called, but he broke through the door and left.

He said Monday he was also suing a journalist at Antenna for "instigation to abuse of power" for allegedly provoking a prosecutor to order his arrest.

Golden Dawn, which vehemently denies the neo-Nazi label, has been accused of violent attacks against immigrants in Athens, and its members have also allegedly been involved in clashes with left-wing and anarchist groups. The party insists it is a nationalist patriotic group.

It campaigned on a platform of ridding Greece of illegal immigrants and cleaning up crime-ridden neighborhoods, and advocates mining Greece's borders to stop illegal immigration. Riding a wave of anger against Greece's mainstream politicians and their handling of the country's deep financial crisis, the party won nearly 7 percent of the vote on May 6, in an election in which no party won enough votes to form a government.

The 21 Golden Dawn deputies elected to the country's 300-member Parliament took their seats for a day before parliament was dissolved ahead of a new election on June 17. Opinion polls conducted before a two-week pre-election ban projected the party winning enough votes to go above the 3 percent threshold for Parliamentary seats.