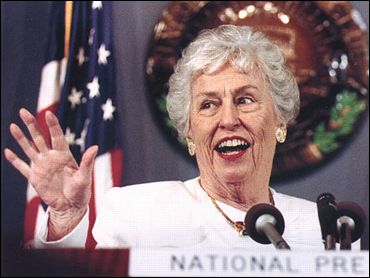 Martha Griffiths, a former congresswoman who used a feisty personal style and sheer determination to shepherd landmark equal rights legislation during her 10 terms in the House, has died. She was 91.

Griffiths' most notable achievements were her leading role in congressional approval of the Equal Rights Amendment and a speech she delivered that led to the banning of sex discrimination in the 1964 Civil Rights Act.

She died Tuesday at her home in Armada, Mich.

Typical of Griffiths' blunt approach was a letter she once wrote to an airline president after he defended policies requiring stewardesses to be young and petite.

"Just exactly what are you running — an airline or a whorehouse?" her letter said.

Rep. Carolyn B. Maloney, D-N.Y., said Griffiths will be remembered for her courage.

"Her commitment and determination to advance opportunities for women will be felt by generations of young women who will never know her, but are living the dreams she fought so long and hard for," Maloney said in a statement.

Griffiths said earlier pioneers of equal rights gave her the strength to fight.

"I would not be sitting in this seat today if it were not for the women who went to jail so that all of us could vote and for women who have worn their shoes out helping me get elected," Griffiths once said in explaining why she pushed to outlaw sex bias in the Civil Rights Act.

Congress overwhelmingly approved the Equal Rights Amendment in 1972, but it has since been ratified by only 35 state legislatures, three short of the number needed to add it to the U.S. Constitution.

"I think part of the problem is that it's also associated with rights for minorities, and you'd be surprised how much racism there still is in this world," Griffiths said in a 1990 interview. "Another thing, some men resent tremendously the idea of a woman coming into their offices and really having a chance at promotion."

Griffiths served in the House from 1955 to 1975. She served on several corporate boards before being elected Michigan's lieutenant governor in 1982 and 1986. She also served from 1949 to 1952 in the Michigan House and was the first female Detroit Recorder's Court judge.

She was the only woman to serve in all three branches of Michigan government, said Michigan Democratic Executive Chairman Mark Brewer.

She is a member of the National Women's Hall of Fame at Seneca Falls in New York, birthplace of the women's equality movement.