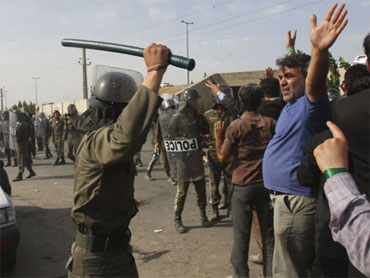 A New York-based human rights organization criticized the governments of five Middle Eastern countries Tuesday, including close U.S.-allies Jordan and Saudi Arabia, for their treatment of women and minorities.

Human Rights Watch released the chapters of its 2010 World Report that deal with Jordan, Lebanon, Saudi Arabia, Syria and Yemen, accusing them of poor treatment of women, minorities and refugees.

The release of these latest chapters of the annual report follows Sunday's description of the post-election crackdown in Iran and the mistreatment of migrant workers in the United Arab Emirates.

The chapters described a pattern of discrimination against minorities in the region, including Saudi Arabia's treatment of its 2 million-strong Shiite population and Syria's repression of its Kurds.

In Lebanon, the report criticized the living conditions of hundreds of thousands of Palestinian refugees, while asserting that the Yemeni government committed violations in its battle with Shiite rebels in the north.

Tensions with Shiites in Saudi Arabia reached new heights in 2009 when clashes between Shiite pilgrims and security guards in the city of Medina resulted in scores of arrests. At least one Shiite mosque was closed down in the kingdom.

The report did note that King Abdullah had replaced conservatives in the religious establishment and judiciary, but saw little overall improvement in human rights, especially for women.

"Authorities continue to systematically suppress, or fail to protect, the rights of fourteen million Saudi women and girls," the report said.

Just to the south, in Yemen, Human Rights Watch described a severe deterioration in the rule of law as a government facing opposition on several fronts arrested journalists and activists.

With a Shiite rebellion in the north and a southern separatist movement, Yemen's government has conducted sweeping arrest campaigns against any suspected sympathizers of either movement, charging many with "contesting the unity of the state."

In Syria, meanwhile, a chronically poor rights situation worsened, according to the report, with some 45 people arrested for membership in unauthorized political groups or those with links to the Kurds or Muslim Brotherhood.

In contrast to the other countries, the report saw no significant decline in the human rights situation in Jordan, though it did note that criticizing the king still carried heavy penalties, and perpetrators of "honor killings" were receiving lenient sentences.

So-called honor killings involve slayings of women - often by male relatives - for perceived slights to their families' honor, such as accusations of infidelity or of having romantic relationships outside of marriage.

A Rise in Activism Brings a Backlash of Repression

In an introductory essay to this year's report (the group's 20th annual review), executive director Kenneth Roth writes that in recent years the human rights movement's ability exert pressure on governments on behalf of victims has grown enormously.

"Today, activists are capable of exposing abuses most anywhere in the world, shining an intense spotlight of shame on those responsible, rallying concerned governments and institutions to use their influence on behalf of victims, and in severe cases, persuading international prosecutors to bring abusers to justice. These are effective tools, and they have retained their power even as certain traditional allies wavered in their support for human rights."

But, Roth adds, that effectiveness has created a violent backlash from repressive governments which grew particularly intense in 2009.

"Certain abusive governments, sometimes working together, sometimes pursuing parallel tracks, are engaged in an intense round of attacks on human rights defenders, organizations, and institutions. The aim is to silence the messenger, to deflect the pressure, to lessen the cost of committing human rights violations. These attacks might be seen as an unwitting tribute to the human rights movement. If governments were not feeling the heat, they would not bother trying to smother the source."

Roth said that governments which consider themselves supporters of human rights often remain silent in the face of abuses committed by their allies, citing diplomatic or economic priorities: "But that silence makes them complicit in the abuse. The only proper response to serious human rights violations is to turn up the heat on the abusers."

The rights group also gave a mixed reading on the Obama administration's effort to restore America's credibility on human rights, claiming a marked improvement in presidential rhetoric has not fully translated into policy and practice.

For example, while President Obama ended the CIA's coercive interrogation program propagated by the Bush administration, Roth said the U.S. must uphold domestic and international laws against torture by investigating and prosecuting those who have ordered, aided or carried out torture and other abuses.

Among the dangers facing the human rights movement cited in the report:

• Abuse of individuals and organizations - The report says that in some nations, including Eritrea, North Korea and Turkmenistan, the governments are so abusive that no domestic human rights movement can function.

• Murder - The report says human rights monitors have been murdered in order to silence them in Russia, Sri Lanka, Kenya, Burundi and Afghanistan.

• Closing down rights organizations - Human rights organizations have been routinely shut down, harassed or threatened with violence in China, Colombia, The Democratic Republic of Congo, Iran, Nicaragua, Sri Lanka, Sudan, Uzbekistan and Venezuela. Ethiopia and Egypt have used restrictive regulations to stifle the work of NGOs. Other tactics used to silence critics of governments have been disbarment of lawyers, faked criminal charges and criminal libel laws.

• Health policies - The essay "Abusing Patients," discriminatory or negligent health policies are recounted, such as the human rights violations suffered by women and girls in relation to pregnancy, birth, preventable maternal mortality and disability.

• "Black jails" - In China, petitioners seeking redress for abuses (ranging from government corruption to police torture) are among those abducted and detained.

Roth said that the only way that abusive governments will end their assault on rights defenders is if other governments that support human rights make rights a central part of their bilateral relations.

"Governments that support human rights need to speak out, to make respecting human rights the bedrock of their diplomacy - and of their own practices," Roth said. "They need to demand real change from abusive governments."