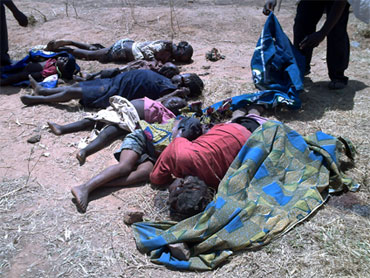 Rioters armed with machetes slaughtered more than 200 people including a 4-day-old infant, residents said, less than two months after sectarian violence in the volatile region left more than 300 dead.

One aid worker said Monday it was difficult to tell how many people had been killed because some bodies were charred beyond recognition.

The violence in three mostly Christian villages Sunday appeared to be reprisal attacks following the January unrest in Jos when most of the victims were Muslims, said Red Cross spokesman Robin Waubo. State officials did not comment on what may have prompted the latest attacks.

The bodies of the dead lined dusty streets in three villages south of the regional capital of Jos, local journalists and a civil rights group said Sunday. They said at least 200 bodies had been counted by Sunday afternoon.

The bodies of children tangled with each other in a local morgue, including a diaper-clad toddler. Another young victim appeared to have been scalped, while others had severed hands and feet. One female victim in the morgue appeared to have been stripped below the waist, but later covered by a strip of black cloth.

"These are the ones we know, but there are corpses charred beyond recognition," he said.

The killings represent the latest religious violence in an area once known as Nigeria's top tourist destination, adding to the tally of thousands already killed in the last decade in the name of religious and political ambitions.

Jos lies in Nigeria's "middle belt," where dozens of ethnic groups mingle in a band of fertile and hotly contested land separating the Muslim north from the predominantly Christian south.

Muslims have complained about being denied jobs and other benefits in Jos by the Christian-dominated government. However, many Muslims also operate shops and businesses in a nearby town where the tourist trade has dried up and the surrounding tin mines have been abandoned, stoking fears for Christians about retaliation from Muslim neighbors.

Jos has been under a dusk-til-dawn curfew enforced by the military since January's religious-based violence. It was not clear how the attackers managed to elude the military curfew early Sunday.

Acting President Goodluck Jonathan said security agencies would be stationed along Plateau state's borders to keep outsiders from coming in with more weapons and fighters.

"(We will) undertake strategic initiatives to confront and defeat these roving bands of killers," he said in a statement. "While it is too early to state categorically what is responsible for this renewed wave of violence, we want to inform Nigerians that the security services are on top of the situation."

On Monday, an Associated Press reporter saw nearly 100 soldiers in tan military fatigues and bulletproof vests standing near armored cars at an entrance into Jos. The street was mostly deserted but soldiers appeared tense, holding Kalashnikov rifles at their hips and pointing them at passing cars.

More than 600 people had fled to a makeshift camp that still held victims from January's violence, said Red Cross official Adamu Abubakar. He expected more to come, putting an even bigger strain on the already limited humanitarian aid for those fleeing the violence.

In Dogo Nahawa, three miles (five kilometers) south of Jos, those who survived claimed their attackers shouted at them in Hausa and Fulani - two local languages used by Muslims.

Yenlong, the state government spokesman, also said police were seeking to arrest Saleh Bayari, the regional leader of the Fulanis, because Bayari's comments incited the attack. He offered no other details.

But the chairman of the local Fulani organization denied that his people were involved in the attack.

Nigerian military units began surrounding the affected villages Sunday afternoon, Waubo, the Red Cross spokesman, said. He said the agency did not know how many people may have died in the fighting but workers have been sent to local morgues and hospitals to check.