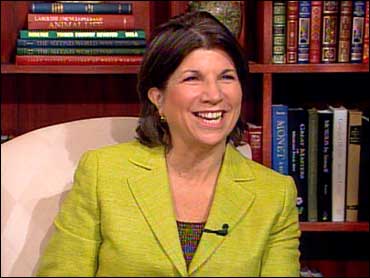 There's something about the sister relationship that's irresistible to writers.

And it's never been more tantalizing than in Anna Quindlen's latest novel, "Rise and Shine," in which readers meet two sisters with very different lives in New York City — one rich and famous and the other, not.

It shows everything isn't always as it seems, and change is inevitable.

Quindlen, the Pulitzer Prize-winner whose last novel came out three years ago, talked the new onw Friday with co-anchor Harry Smith on The Early Show

"Rise and Shine" is the story of a morning television anchor and her sister, a woman of modest means who works with the homeless in the Bronx.

Quindlen says the book incorporates not only a look at the nature of the relationship between sisters, but at the disparity between appearance and reality. She also speaks with Smith about birth order, and setting the novel in New York City.

To read an excerpt of "Rise and Shine," click here.

To watch Quindlen's appearance on The Early Show Friday, .

The story, Quindlen told CBS News, "is about America's great obsession with fame and failure, the gap between rich and poor, and the difference between appearance and reality."

She adds, "The sisters love each other, but couldn't be more different, and there is one moment that changes their lives forever."

Was there something special about the sister relationship for Quindlen?

"I'm fascinated by birth order," Quindlen observes. "I'm an oldest child and married to an oldest child. When I had my children, I believed in the primacy of the eldest child. You're never free when you're the eldest child. Bridget (the younger, social worker sister in the book) is free to be herself. She's free to look and see the world in a way that Meghan (the TV anchor) has not allowed herself. Meghan is driving and laser like in action. Bridget has the freedom to observe. Younger children are the reporters. When you're the eldest, you're at the front of the train driving it, making things happen and looking after the others.

"There's a dual nature in their relationship. Meghan is not only the older sister, but she has a motherliness about her. She has taken care of Bridget. That motherliness takes some of the edge off who she is. But, when Meghan opts out of her life, it's Bridget who steps up and becomes the powerful one. And that is disconcerting to Meghan."

Why make Meghan a morning TV show host? Says Quindlen, "I wanted her to be really famous and, the truth is, some of the most famous people in our country are the people who sit in those chairs in the morning. I frequently think about what the viewer is seeing: a companionable chat in a living room. They don't' see the lights, the mikes, the makeup. They don't see any of the dozens of people who make it happen. There's a triumph of appearance over reality. It looks like one thing, when it's really something else."

Meghan is the powerful anchor of the morning show "Rise and Shine," and in a heartbeat changes the course of her career when, believing her microphone is off, refers to the guest with a harsh curse.

Quindlen says, "If this happened in real life, would her career have been blown apart? No. Meghan was supposed to go back on the air and apologize. But she didn't do that. So, she was punished, not for the crime, but for how she behaved after the crime."

"The frustrating thing for her is that everyone knew what she said was true. In the America we live in today, you can never really tell the truth. You have to massage into an acceptable message."

About fame, Quindlen says, "Really smart people are seduced and repelled by fame. Meghan hates it, but needs it. She complains about her job and wonders why she's doing it. Well, there are lots of reasons. (For starters) she makes over $10 million a year."