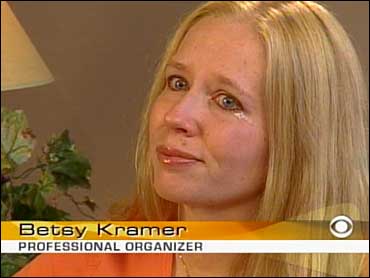 Betsy Kramer found a new life in the ruins of a disastrous fire.

She used to have plenty of "stuff" all around, but found that losing almost everything was exactly what she needed to transform herself.

And now, reports The Early Show national correspondent Tracy Smith, Kramer has a professional organizing business that seeks to help people conquer their clutter, too.

Smith says it's Kramer's mission to help others see the same light she did. She tries to help them get more organized and, as a result (she hopes) feel more in control.

"You can't have it all," Kramer told Smith. "But you can have what's most important. So you just have to live your life as a reflection of your priorities."

It's a creed Kramer lives by. Her home in Elysburg, Pa., which she shares with husband Scott and two kids, is streamlined and organized.

There was a time, Smith says, when Betsy thought stuff was important, maybe too important.

"I bought things on sale, not necessarily because I liked them," Kramer admitted to Smith. "And that's pretty much how I led my life."

But all that changed in December 2001, when fate was to clear out Kramer's clutter.

The Kramers were vacationing in Disneyworld, completely unaware that back in Pennsylvania their house was on fire.

Kramer says she first thought, "I can't handle this," when the family returned and saw their gutted home.

But, looking at the complete devastation, at all that she'd lost, an emotional Kramer says she saw something else: "My daughter woke up and I thought, 'Look at what was spared!' "

She still had her family.

And all that stuff "was meaningless."

One daughter's room "was the worst," Kramer says. "It was bad. There was no floor. I mean, there was nothing, and I thought, 'So what if I don't have her things?' "

Out of the ashes of her old house, came a new philosophy.

"I see so many people that hold onto things," Kramer, with tears streaming down her face, tells Smith. "And I think that's why I'm doing this. To show them (her clients) it's not them! That we are not our things. And our things are not us."

In their new house, built on their old lot, the Kramers lead uncluttered lives.

"I used to have a huge walk-in closet full of nothing to wear," Kramer reflects. "And now, I have a regular-size closet of clothes. I wear all of it!"

Kramer started sharing tips with friends, which turned into a business where she offers clients everything from help with paper clutter to streamlining the grocery list.

"Everybody knows who they are inside," Kramer says. "It just takes getting rid of that clutter to find out who they are."

While the business is just taking off, Kramer's path is now clear.

"It took losing everything around me to see what was right in front of my face!" she says. "So, hopefully, when I go to people and we sit down, I can help them to discover that, without them having to actually lose everything."

Authorities say they still don't know what caused the fire, just that it was electrical, and started in the room of one of the Kramer daughters.