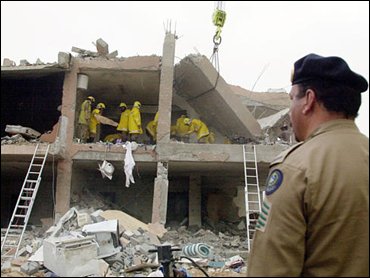 An al Qaeda mastermind of the May 12 terrorist bombing in Riyadh has been arrested in Saudi Arabia, U.S. and Saudi officials said Thursday.

"Al-Ghamdi is in custody and under interrogation," Ambassador to the United States Prince Bandar bin Sultan said in a statement. — "We hope that our interrogations will provide information that will lead to additional arrests."

He was one of the top al Qaeda operatives in the kingdom, officials said. The Saudi, around 30 years old, fought with al Qaeda in the U.S.-war in Afghanistan.

"A source close to the Saudi Embassy says al-Ghamdi surrendered to authorities, (while) an American source says he was captured," reports CBS News Correspondent Mark Knoller. "Either way, U.S. intelligence regards it as a significant development."

Also known as Abu Bakr al-Azdi, he was at Tora Bora, where Osama bin Laden was thought to be hiding, in late 2001, the officials said, speaking on the condition of anonymity. He left before the U.S. bombing began.

Officials say he has been linked to Saif al-Adil and Abu Mohamed al-Masri, two of the most senior al Qaeda operatives who remain at large. U.S. officials have said both are thought to be hiding in Iran.

Al-Ghamdi was also an associate of Khalid Shaikh Mohammed, the alleged Sept. 11 mastermind now in U.S. custody, the officials said.

In the May 12 attack, gunmen and suicide bombers attacked three housing compounds populated by Westerners and other foreigners. Nine attackers and 25 victims were killed.

On May 16, in Casablanca, Morocco, a dozen suicide bombers, using crude homemade explosives stuffed into backpacks, blew themselves up at five locations, killing 29 victims.

Officials said the two attacks were probably ordered by top al Qaeda operatives to demonstrate the group was still viable. More strikes were feared but have not materialized.

Al-Ghamdi was also among the 19 alleged militants wanted since Saudi police discovered a weapons cache in Riyadh early last month.

"Justice will take its course within the framework of the laws," Saudi radio quoted the Interior Ministry official as saying.