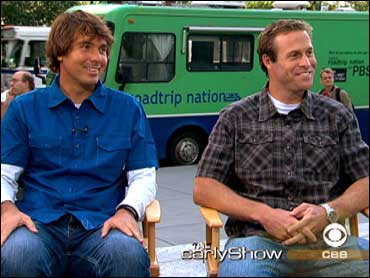 Five years ago four college grads who didn't know what to do with their lives, hopped in an RV and went looking for successful people in unconventional careers.

That trip led to a documentary, a PBS series, a book called "Roadtrip Nation," and a campus movement that encourages students to follow their own paths.

Mike Marriner and Brian McAllister are two of the founders of Roadtrip Nation. On Monday the pair talked with The Early Show co-anchor Russ Mitchell about their first road trip and the development of their campus outreach program which helps college-age students find their path in life.

"We were just coming out of college and not really sure about the next step," Marriner recalled. "Like a lot of twenty-somethings, there's a lot of confusion and pressure from people around us telling us what to do with our lives. We needed some space to explore the world on our own accord and meet with inspirational people to see where they were at in their early 20s, how did they navigate that period of ambiguity to get where they are?"

Marriner and McAllister made the decision to hit the road with a group of friends. "There was a specific night we were sitting in our college apartment and feeling like, 'Do we really want to go to med school or law school or accounting?' We just didn't resonate with those paths. We felt we needed some kind of explorational experience after college to get exposed to things we didn't know were out there," said Marriner.

Along the way, the pair met quite an eclectic group of people; from CEOs and executives to mechanics. What was the most important thing they learned?

"I think the most important thing that I've learned is the whole metaphor for life is such a road trip," said McAllister. "People of all ages are always going through transitions, and there's time in our lives that we really need to get out there and find out what we're passionate about. I think that's the core of what makes us tick."

Marriner explained the term "fight the noise" which is used in their book "Roadtrip Nation." "I think one thing we found that was consistent in all the people that we met was that they really did follow what they were passionate about. It sounds so simple," said Marriner. "But a lot of times what keeps you from doing that is the noise around you and people telling you to find stability. Stability and security are great, but not at the cost of sacrifice sacrificing of what you love to do. The noise takes you off that path."

The guys say that the biggest surprise of their road trip was that even the people who had achieved great successes didn't always have it all planned out.

"You think that the people that have found success in the world had it all figured out in their early 20s," said Marriner. "The truth is that most people didn't know what they wanted to do at a certain point and they took that time to wander and explore the world. Through that process, they got to know themselves better and they also saw things they didn't know existed."

Marriner and McAllister say the feedback they've gotten about their series, which airs on PBS, has been astounding.

"We're getting really such positive feedback from the twenty-somethings and from the parents that have high school students and teachers and faculties using our stuff in classrooms," said McAllister. "It really inspires us and keeps us on the road."