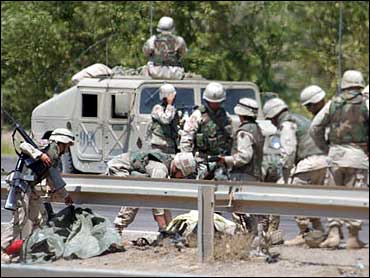 A U.S. soldier was killed and two others were injured when a powerful explosion went off as their supply convoy made its way along the main highway west of Baghdad, soldiers at the scene said Wednesday.

The explosion occurred at about 9 a.m. as a 20-vehicle military convoy was passing a wrecked truck that had been abandoned along the side of the road, Spc. Jose Colon told The Associated Press. The soldier that died was blown out of a truck that was nearest to the blast, Colon said. Soldiers believe a bomb was hidden in the wreckage and remotely detonated as the convoy passed.

Sgt. Diego Baez said he was in the vehicle that was most badly damaged, but managed to escape injury. He wept as he described the dead soldier.

"We slept next to each other just last night. He was my best friend." Baez said.

The injured soldiers shook as they were put into a Humvee with medical personnel and taken to a nearby hospital.

"We were just driving along when the explosion hit," Colon said. "It was very big."

After the explosion other soldiers arrived in Bradley fighting vehicles and armored personnel carriers. They began house-to-house searches in the villages surrounding the scene of the attack. A local resident, Mohammed al-Qazi, said the bombing was the work of men from the tense cities of Fallujah and Ramadi, farther down the road. "It was not people from Abu Ghraib," he said.

Those cities are part of the so-called "Sunni Triangle" the stretching west and north of Baghdad where pro-Saddam insurgents have been carrying out attacks against the American occupation force at a rate of 12 each day.

Soldiers said the victim had recently arrived in Iraq after being stationed in Kuwait. The soldiers were all reservists from a supply unit based in Puerto Rico.

"We just lost one of our buddies. It could have been any of us," said Spc. Adalberto Bonilla, who along with Colon had been in a vehicle behind the most badly damaged truck. Both he and Colon were unharmed.

Spc. Carlos McKenzie said the supply convoy, which was on its way to a U.S. base in the desert near Iraq's border with Jordan, did not have enough protection by more heavily armed American units.

About a half hour after the attack, the truck that absorbed the blast's force was still burning.

Abu Ghraib, home to what was once Saddam Hussein's most notorious prison, lies just west of the capital.

Sgt. 1st Class Roberto Delmoral, a member of the supply unit said he believed the attackers had placed the wrecked truck along the road and filled it with explosives. He said the unit had been attacked in the same region last week.

"They shot at us with a rocket-propelled grenade and we shot back," Delmoral said.

Heavily armed U.S. soldiers sealed off the road. A U.S. military spokesman in Baghdad said he had no information on the attack.

U.S. soldiers have come under increasingly ferocious attacks in recent weeks. The soldier was the 33rd to die in hostile action since U.S. President George W. Bush declared an end to major hostilities on May 1.

Also Wednesday, a U.S. Marine died in the southern city of Hilla when he fell off a building he was guarding, the military said. The soldier was rushed to a hospital but died of his injuries.

The deaths highlighted the long and painful road left for coalition forces as they try to stabilize Iraq.

On Tuesday, the American administrator of Iraq linked the length of the U.S. occupation to Iraq's political process, saying that American forces would remain in the country until Iraqis agree on a new constitution and set up a democratic government.

The new Governing Council, meanwhile, was meeting again Wednesday to discuss security and education matters, said Nouri al-Badran, spokesman for the Iraqi National Accord, which holds a seat on the council members. On Tuesday, it decided to set up special courts to try former members of Saddam Hussein's regime who are accused of involvement in mass executions, torture and other human rights violations.

The U.S. administrator, L. Paul Bremer, said Tuesday that the process of rebuilding the Iraqi political system was already under way with the establishment of the 25-member council — the first national postwar Iraqi political body, largely hand-picked by him.

"We have no desire to stay a day longer than necessary," Bremer said. "The timing of how long the coalition stays here is now in the hands of the Iraqi people."

The Governing Council, whose members were selected rather than elected, is meant to be the forerunner to a 200-250 member constitutional assembly that would start drafting a constitution in September. That is expected to take nine months to a year and free elections to pick a government are expected to follow.

But even talk of removing coalition soldiers from Iraq seemed premature while guerrilla-style attacks against U.S. forces are increasing and many major countries are balking at the idea of sending peacekeepers to replace exhausted American troops.

Many American soldiers thought they'd be home this summer, but their hopes were dashed in a U.S. Army e-mail to spouses Sunday.

American soldiers grumbled when told they would have to stay longer in a country where U.S. forces say they are coming under an average of 12 attacks each day.

"I'm tired of going to bed wondering if I'm going to wake up in the morning," said Spc. David Myers Jr. of the 3rd Infantry Division's 3rd Battalion, 7th Infantry Regiment in Habaniyah, west of Baghdad.

Late Tuesday, the U.S. Central Command said in a news release that it still intended to remove 3rd Infantry soldiers "by September, pending international or U.S. replacement units. As always, the security situation could affect deployments and redeployments."

Bremer repeated the charge that hard-core Baathists, former members of the Fedayeen Saddam militia and the intelligence services were behind the attacks.

Nevertheless, the increasing frequency and sophistication of the attacks — and growing doubts about the basis for the war — have contributed to the decision by some countries not to contribute troops.

On Tuesday, France ruled out sending troops, following India and Germany in rejecting U.S. calls for help without approval from the United Nations.

The Bush administration has scored some success in recruiting other countries to help patrol Iraq. Poland will contribute 2,300 soldiers to a brigade that will also include units from Bulgaria, Romania, Hungary and Lithuania.

A second brigade will have 1,640 Ukrainians and the third 1,100 Spanish troops as well as units from Honduras, the Dominican Republic and El Salvador and Nicaragua.