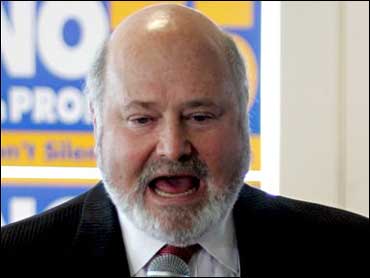 "I've made a definite decision that it's not something I'm going to do," the Democratic activist said in a telephone interview with The Associated Press.

Reiner, whose hit films include "When Harry Met Sally" and "A Few Good Men," said concerns about his family had persuaded him to stay out of the governor's race.

He also said he wants to focus his political energies on passing a ballot initiative to establish universal preschool for California children.

"My kids are young, and we've all decided this isn't a good time for me to do this," Reiner said. "My focus is the kids of California, and my own kids."

Reiner, 58, has been rumored for years to be considering a campaign for public office, but he has focused primarily on statewide ballot initiatives.

He is backing an initiative expected to appear on the June ballot that would assess a 1.7 percent tax on individuals making more than $400,000 a year to pay for preschool programs for all California children.

In 1998, Reiner sponsored a proposition that expanded children's health programs by hiking cigarette taxes by 50 cents a pack.

Recently, he campaigned actively against a ballot initiative that would have required government unions to get permission from members before using their dues for political purposes. Voters rejected the initiative, along with three others backed by Schwarzenegger, in a Nov. 8 special election.

Reiner said he considers the politically weakened Schwarzenegger a longtime friend, and wouldn't comment on whether he was vulnerable to a Democratic challenge next year.

Westly will remain focused on his own campaign regardless of who enters the race, spokesman Nick Velasquez said.

Reiner began his career playing Mike Stivic — dubbed "Meathead" by the Archie Bunker character — on the long-running hit series "All in the Family."