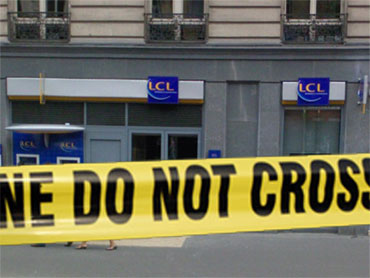 Robbers bored through an underground wall into a bank vault in Paris, held a security guard hostage for hours and made off with loot from private safe deposit boxes in a nighttime heist, officials said Tuesday.

The thieves entered the LCL bank branch near Paris' gilded Opera through a neighboring cellar, then torched the vault to cover their tracks before fleeing, police and judicial officials said.

An investigation was under way to determine the details and the total take from the heist that started Saturday night and lasted until dawn Sunday. No arrests had been made, authorities said.

The guard was freed as the robbers fled, and he alerted firefighters who put out the blaze, police said. The blackened carcasses of power tools - a drill, a compressor and an angle grinder - littered the scene.

It was not immediately clear how the burglars got in to an underground chamber adjacent to the vault.

Security guard Shery Kore recounted on France's BFM TV that his unidentified colleague who was held hostage spoke of three assailants who told him to stand spread-eagle against a wall for nine hours.

"They told him: 'If you want to stay alive, don't look behind you,'" Kore said.

BFM broadcast pictures of the hole - which has since been filled back with concrete - that appeared about wide enough for a thin man's torso to fit through.

"I didn't have any money inside but jewels, quality jewels that belonged to my wife, that I had brought back from Africa a long time ago," he said. "They had a sentimental value for us. It is always the same thing in a robbery."
By Associated Press Writer Jamey Keaten