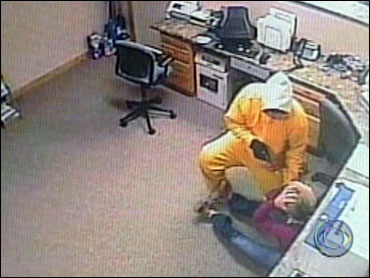 A Utah woman says she is doing great, just days after she became the victim of a frightening robbery inside her family's quick loans store. The entire ordeal was

On the videotape, the robber can be seen pushing Angi Hirsche to the ground and shoving what appeared to be a gun into her face. The man then forced Hirsche to open the safe.

After emptying the safe, the robber tried to duct tape the young mother, who tried to fend off the man, and put up a struggle.

Luckily, Hirsche's husband Cy called the office; when he heard the commotion in the background, he called 911.

Speaking with The Early Show co-anchor Julie Chen from Los Angeles on Wednesday, Hirsche said she actually doesn't relive the horrible ordeal when she sees the tape.

"It's almost empowering because I get out of it okay. It has a happy ending and that was what was important," she said.

When did she realize she was being robbed?

"I was bending over to put my purse under the counter and next thing I know, I'm being pummeled over on to the ground and banged my head and a gun is being shoved into my face," she recalled. "For a split second I thought it was a joke and then quickly realized this was not a joke and this was a life and death matter all of a sudden."

It turns out the gun was a toy gun, but Hirsche said she was overcome by the robber's size and that the gun wasn't even an issue. "It was so overpowering that it was just all encompassing."

Did Hirsche ever train as to what to do in the event of a hold-up?

"Actually, we own the store…. We live in a very safe area. There's always a chance for robbery when cash is involved, so we were prepared, which is why we had great surveillance and we did have a panic button. But, no, we've never actually trained for this exact," she said.

Hirsche says her instinct kicked in. "You do what you can to survive. I started taking in details and wondered what I can do and tell this guy to get him to keep me safe, so I can keep myself safe."

She decided she would speak to the assailant. "I know that everyone loves a mom. And I know he had a mom. If I could tell him I have two wonderful kids at home and let him know that I love him and they need me and please don't hurt me," she explained.

Hirsche believes her strategy helped. "And I also tried to offer him my ring. I tried to offer him my car, my purse, on top of the cash that he took. He also tried to get me to go down the hall to the bathroom. I had learned watching a show on Oprah, that never let them take you to a second location. So I convinced him that there were people down there if he took me down there that he'd be caught and that he would be in trouble."

She recalled a point where she thought she was going to die.

"I thought if he got me down into that bathroom, yeah I definitely thought I wouldn't make it back," Hirsche said.

Meanwhile, Hirsche's husband Cy was making what turned out to be a routine call to the store to check on his wife.

"We always call to make sure we got there okay and everything is okay. It was kind of unusual for her to be working at the store because like she said, we are owners and have employees that typically do this. However, since we were planning on coming to Disneyland this week, we wanted to give them the Saturday off and so my wife actually, the person she is, wanted to volunteer. So she got there. I called her right when she got there just make sure she was okay," he recalled.