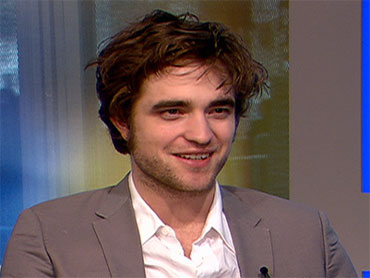 Robert Pattinson's known for vampire love in the "Twilight Saga" movies. But can the actor convincingly tell a different tale of l'amour?

That's just what the star tries to do in "Remember Me," a drama about love amid loss. Pattinson filmed the movie in just two months between making the second and the third "Twilight" movie.

Pattinson starred in and executive produced the film. He said he decided to make the movie after reading several scripts because it seemed like it "was never going to get made."

He said," It's so different. It's difficult to categorize."

He explained, "It feels like kind of that, I don't know, late '70s kind of romantic. Like romantic dramas were a little bit deeper than they are now. There are no heroes, there are no villains. Everyone in it is a good person. It's just sort of a good family trying to deal with tough times."

"Early Show" co-anchor Maggie Rodriguez said "deep" is the perfect descriptor for Pattinson in this movie.

"I was so impressed," she said. "I was so struck by how deep and how emotional and how conflicted your role was."

As for his "Twilight" minions, who've dubbed themselves "Twihards," Pattinson says he's not gotten quite used to the spotlight.

He said he doesn't know how to deal with the "hysteria" of the crowds.
"(You) don't know what to say," Pattinson said. "I hope I can look back on it with very, very fond memories of it, this completely surreal time of my life."

Pattinson, a favorite of tabloids, said the most outrageous thing he's read about himself was in an Australian magazine that said he was secretly pregnant.

"It was this big scandal," he said. "And they tried to form the article by saying I was hiding it."

The next "Twilight" film, "Eclipse" debuts in June. Is the star ready for the madness again?

"I'm not sure," he said. "I've seen nothing from the film. I've just seen the trailer, which is on the front of 'Remember Me.' And that's it. I think it would be much more of a sort of action film from what I can tell."

Pattinson's currently shooting a film called "Bel Ami" about a French journalist who sleeps his way to the top of the social ladder. Slated for release next year, the film co-stars Uma Thurman, Christina Ricci and Kristin Scott Thomas.

Rodriguez joked, "You're not looking forward to that role at all, are you? That's horrible."