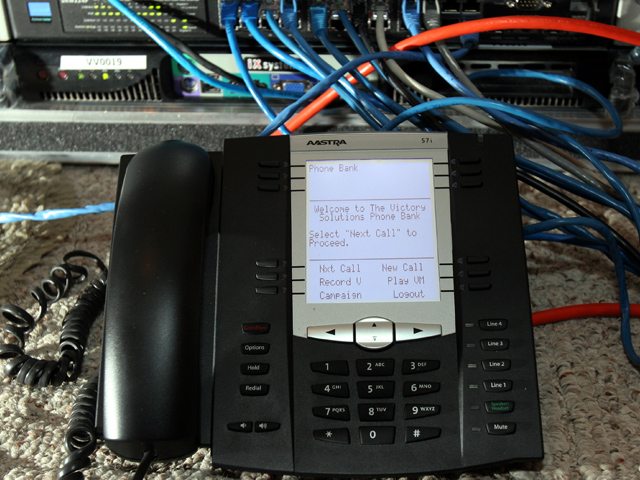 (AP) WASHINGTON - So much for silence from telemarketers at the cherished dinner hour, or any other hour of the day.

Complaints to the government are up sharply about unwanted phone solicitations, raising questions about how well the federal "do-not-call" registry is working. The biggest category of complaint: those annoying prerecorded pitches called robocalls that hawk everything from lower credit card interest rates to new windows for your home.

Robert Madison, 43, of Shawnee, Kan., says he gets automated calls almost daily from "Ann, with credit services," offering to lower his interest rates.

FTC to ban most "robocalls"
Congress: Let people eat dinner in peace
Beware of pre-installed malware on your new PC

"I am completely fed up," Madison said in an interview. "I've repeatedly asked them to take me off their call list." When he challenges their right to call, the solicitors become combative, he said. "There's just nothing that they won't do."

Madison, who works for a software company, says his phone number has been on the do-not-call list for years. Since he hasn't made any progress getting "Ann" to stop calling, Madison has started to file complaints about her to the Federal Trade Commission, which oversees the list.

Amid fanfare from consumer advocates, the federal do-not-call list was put in place nearly a decade ago as a tool to limit telemarketing sales calls to people who didn't want to be bothered. The registry has more than 209 million phone numbers on it. That's a significant chunk of the country, considering that there are about 84 million residential customers with traditional landline phones and plenty more people with cellphone numbers, which can also be placed on the list.

Telemarketers are supposed to check the list at least every 31 days for numbers they can't call. But some are calling anyway, and complaints about phone pitches are climbing even as the number of telemarketers checking the registry has dropped dramatically.

Government figures show monthly robocall complaints have climbed from about 65,000 in October 2010 to more than 212,000 this April. More general complaints from people asking a telemarketer to stop calling them also rose during that period, from about 71,000 to 182,000.

At the same time, fewer telemarketers are checking the FTC list to see which numbers are off limits. In 2007, more than 65,000 telemarketers checked the list. Last year, only about 34,000 did so.

Despite those numbers, the FTC says the registry is doing an effective job fighting unwanted sales calls.

"It's absolutely working," Lois Greisman, associate director of the agency's marketing practices division, said in an interview with The Associated Press. But, she said, "the proliferation of robocalls creates a challenge for us."

Greisman said prerecorded messages weren't used as a major marketing tool in 2003, when the registry began. "In part because of technology and in part because of greater competitiveness in the marketplace, they have become the marketing vehicle of choice for fraudsters," she said.

For people trying to scam people out of their money, it's an attractive option. Robocalls are hard to trace and cheap to make.

With an autodialer, millions of calls can be blasted out in a matter of hours, bombarding people in a struggling economy with promises of debt assistance and cheap loans. Even if a consumer does not have a phone number on the do-not-call list, robocalls are illegal. A 2009 rule specifically banned this type of phone sales pitch unless a consumer has given written permission to a company to call.

Political robocalls and automated calls from charities, or informational robocalls, such as an airline calling about a flight delay, are exempt from the ban. But those exemptions are being abused, too, with consumers complaining of getting calls that begin as a legitimate call, say from a charity or survey, but then eventually switch to an illegal telemarketing sales pitch.

Robocalls can be highly annoying to consumers because they're hard to stop. Fraudsters use caller-ID spoofing so that when a person tries to call back the robocaller, they get a disconnected number or something other than the source of the original call.

The best thing people can do when they get an illegal robocall is to hang up. Do not press "1'' to speak to a live operator to get off the call list. If you do, the FTC says, it will probably just lead to more robocalls. The caller will know you're there and willing to answer, and may continue to call.

The FTC says people can also contact their phone providers to ask them to block the number. But be sure to ask whether they charge for that. Telemarketers change caller-ID information often, so it might not be worth paying a fee to block a number that will soon change.

"They give a bad name to telemarketers and hurt everybody," says Jerry Cerasale, senior vice president of government affairs at Direct Marketing Association, a trade group.

Cerasale says the do-not-call list has resulted in telemarketers making far fewer cold calls to random people. Instead, he says, marketers have shifted to other methods of reaching people, such as mail, email or targeted advertisements on websites. That, he said, could be one of the reasons that the number of telemarketers checking the registry has dropped so sharply.

In light of the increased complaints, the FTC is stepping up efforts to combat robocalls. It recently released two consumer videos to explain what robocalls are and what to do about them. It also announced an October summit to examine the problem and explore the possibility of emerging technology that might help trace robocalls and prevent scammers from spoofing their caller ID.

Enforcement is another tool. The FTC has brought cases against about a dozen companies since 2009, including Talbots, DirecTV and Dish Network. The cases have yielded $5.6 million in penalties.

The agency said this month that it was mailing refund checks to more than 4,000 consumers nationwide who were caught up in a scam where the telemarketer used robocalls from names like "Heather from card services" to pitch worthless credit card rate reduction programs for an up-front fee. Checks to consumers range from $31 to $1,300 depending on how much was lost.

To file a complaint with the FTC, people can go online to www.ftc.gov or call 888-382-1222 to report their experience for possible enforcement.