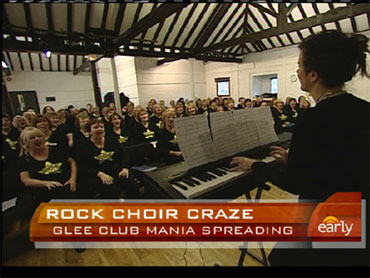 Ever wanted to be in a girl group? Think it might be cheerier than yoga in the morning? In Britain, there is a wall of sound belting out across the country from lots and lots of rock choirs.

Rock Choir Director Caroline Lusher may have unlocked the secret to happiness -- in the middle of England, where 120 voices are raised in what Roth says you might call "untrained melody."

"It's real, it's passionate and there is a lot of emotion there," Lusher said.

Rock choir groups like this have more than 4,000 people now, total, paying about $15 a week each, to sing for fun.

"Singing and dancing, that's what I wanted to do when I was young, but you don't say to your parents, 'I want to be a singer and a dancer,' said rock choir member Mary Morrison.

"It's given me a lot more confidence. I can sing at home confidently now. And I don't mind if people hear me and stuff like that," added Jo Spouncer, another rock choir member.

And this is a glee club anyone can join.

According to Roth, you don't need to read music, and there are no auditions. Basically, all you do to join a rock choir is pay a membership fee -- and pretend you're in the shower.

That's where most of the singers got their experience.

"They're closet singers; they'll sing in the bath, they'll sing on their own in the house and they know secretly they can sing," Lusher explained. "You get a lot of people who say, 'I can't sing, you know, in social environments.' I say, well, you can, really."

A one-time lounge singer with a knack for teaching, Lusher built a business on that belief.

Now, rock choir is graduating from YouTube to a Unviersal Records recording studio.

With a four-album deal, these English amateurs will soon share a record label with the Black Eyed Peas and Lady Gaga, though the money involved won't be big enough for them to share the wealth.

Which means, in small towns like Farnham, the business stays the same; three-part harmony just for fun and mostly female.

But with ambition to cover the country in song, Lusher's hoping now for a royal audience.

"I really want the queen to see what her subjects are doing in the U.K. and I think she should invite us to perform for her," Lusher said.

If that happens, you can be sure she'll see them smiling.