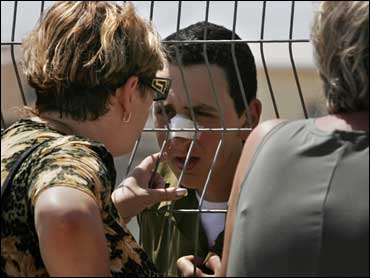 A Palestinian rocket exploded in an Israeli army base early Tuesday, wounding more than 40 soldiers as they slept in their tents and drawing calls for a major military operation against militants launching rockets from the Gaza Strip.

The injury toll was the highest ever sustained in a single Palestinian rocket attack. Prime Minister Ehud Olmert met Tuesday with top military and security commanders, but there was no decision for an all-out offensive in response, officials said. Speaking on condition of anonymity because the meeting was closed, they said Israel might step up air strikes aimed at militants in Gaza.

The wounded soldiers were all recent recruits undergoing basic training at the army's Zikim base, just north of the Gaza-Israel border, and were asleep when the rocket hit an empty tent, the army said.

The army said its ground forces struck back at local militants after the most recent strike, but a Gaza health official said four civilians, including children, were wounded.

Ambulances roared up to the base's gate after the rocket hit before 2 a.m., and army helicopters evacuated the seriously wounded. The emergency room at Barzilai Hospital in the nearby city of Ashkelon was swamped with incoming casualties, and medics emerged from the hospital carrying empty stretchers covered in blood.

Israeli politicians and defense officials have been calling for a more aggressive Israeli response to the near-daily rocket barrages out of Gaza. Attacks last week on the frequently targeted town of Sderot, including one near a crowded nursery school, led parents to pull their children out of school and brought demands for harsh retaliation.

"The question is not whether to create deterrence, but when," said Public Security Minister Avi Dichter, a member of Olmert's ruling Kadima party, told Israel Radio.

Four Palestinian civilians between ages 5 and 21, members of the same family, were wounded in the initial army response, according to Dr. Moaiya Hassanain of Gaza's Health Ministry.

In Washington, the State Department denounced the rocket attack, but called for Israeli restraint.

"We would only counsel, in this case Israel which has suffered injuries and losses as a result of attacks, to take into consideration the affects of what they might do in self defense on the overall political process," spokesman Sean McCormack told reporters.

Two small extremist groups, Islamic Jihad and the Popular Resistance Committees, claimed responsibility for the attack in a joint statement faxed to reporters. Fearing retaliation, Islamic Jihad ordered its militants to avoid using cell phones and public transportation so they could not be tracked and targeted by Israeli forces.

Islamic Jihad has been responsible for nearly all rocket fire out of Gaza in recent weeks. But Israel has said it holds Hamas responsible for the violence, since the militant movement controls Gaza and has done nothing to halt the attacks.

"Gaza is totally controlled by Hamas, and it has the ability to stop this and decided not to," Israeli Foreign Minister Tzipi Livni said at a news conference. "I think we have tools to do this, tools that are not only military," said Livni, who has hinted that Israel should cut fuel or power supplies to Gaza in response to the attacks.

Hamas spokesman Fawzi Barhoum praised Tuesday's attack as a "victory from God." In Gaza City and in the southern Gaza town of Rafah, youths in Islamic Jihad scarves and T-shirts handed out sweets to motorists.

"Such operations have restored the credibility and honor of this nation," said Ahmad el-Sheikh.

Another rocket hit an Israeli kibbutz near Gaza later Tuesday morning. Hamas militants also announced they launched a mortar barrage at Kerem Shalom, a border crossing where humanitarian aid crosses from Israel into Gaza. There were no casualties in either attack.