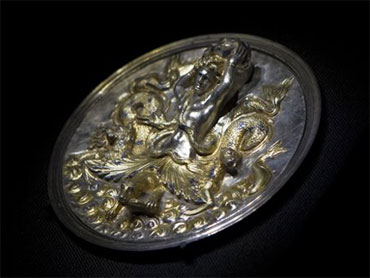 A collection of ancient Greek silverware dating to the third century B.C. is going on display in Rome after being returned by the Metropolitan Museum in New York, officials said Friday.

The 16 pieces of silverware with gold detail were returned as part of Italy's aggressive campaign against illegal trafficking in antiquities. They include two large bowls, a cup with two handles, plates and drinking utensils.

Italian art officials said the pieces form one of the most important Hellenistic silverware collections to have survived from Sicily. The pieces are known as "The Morgantina Treasure" after the name of the ancient Greek settlement where they were excavated, near what is now the Italian city of Aidone.

The pieces came back as part of a deal with the Met that also led to the return of the Euphronios Krater, a 6th-century B.C. painted vase that is widely regarded as one of the finest examples of its kind.

They will go on display at the Museo Nazionale Romano in the Italian capital from Saturday through May 23. The show then moves to Sicily.

Italy has been aggressively campaigned to recover antiquities it says were looted from the country and sold to museums worldwide. It has secured the return of dozens of Roman, Greek and Etruscan artifacts in deals with museums including the Met and California's J. Paul Getty Museum.

In exchange, Italian art officials have agreed to give long-term loans of equally significant treasures.