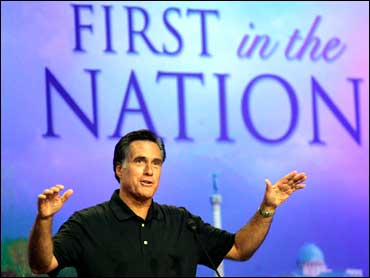 Mitt Romney has already poured a couple of million dollars into the state and it earned him a straw poll victory on Saturday.

Now you should know that Romney's campaign actually subsidized the bus fare and $35 registration fee for many of his supporters.

But a first-place finish in the poll says something – even if national frontrunner Rudy Guiliani was a no-show. The current President Bush used a similar strategy eight years ago to put himself on the map.

Iowa Republicans tend to be rock-ribbed conservatives imbued with evangelical fervor. Rudy might be smart to leave that fight to others, but in that vacuum Romney has used his money, his family and his movie star good looks to get a little momentum – that illusive something which helps voters understand that maybe this guy's got a chance.

I saw it Cedar Rapids last week. Romney's got a shot.