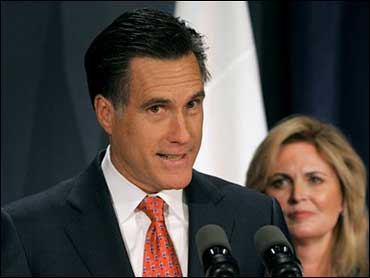 Republican Gov. Mitt Romney said Wednesday that he will not run for a second term next year, fueling speculation he will seek the 2008 Republican presidential nomination.

"My decision comes down to this: In this four-year term, we can accomplish what I set out to do. In fact, we've already accomplished a great deal," he said.

"Serving as your governor is one of the greatest honors of my life," he said. "A year from now, it will be time for me to pass that privilege to someone else. I will not be a candidate for re-election."

Reporters questioned him afterward about whether this meant he would run for president, but he said that decision was "down the road" and "a lifetime away."

"(Sen.) John McCain said he thinks about being president every day in the shower," he said. "I guess I will turn to the words of Star Wars: It's in a galaxy far, far away."

The 58-year-old businessman, son of former Michigan Gov. George Romney, has spent less than three years in elective office, but in that time the state has closed a $3 billion budget deficit without raising taxes, schools have scored first in national math and science tests and Romney held out until the Legislature gave him a tough new drunken driving law he demanded.

Romney began calling supporters and other political figures during the afternoon to let them know of his decision, which was not a complete surprise. Romney had declared earlier this year he was "testing the waters" for a White House run.

Serving just one term allows Romney to leave with his record intact and focus on the presidential race, said Stuart Rothenberg, an independent political analyst in Washington.

The governor said he sat down with his wife, Ann, to make a list of the things he wanted to accomplish as governor.

"Frankly there was very little to do for a second term that I could realistically accomplish," he said. "I said there is no reason to sit in the chair if the things you want to accomplish are done."

Romney has spent considerable time traveling to early voting states such as Iowa and New Hampshire, and sprinkled campaign cash across the country from a so-called leadership PAC used by presidential aspirants.

He had also distanced himself from the liberal political culture in Massachusetts. He vetoed a bill to expand emergency contraception — although the veto was later overridden — and campaigned against a 2003 ruling by Massachusetts' highest court that made the state the first in the nation to allow same-sex couples to wed.

Romney cast himself as "a red speck in a blue state" during an October speech to a Washington think tank.

Should he run for president, Romney will need to break through a pack of more prominent Republicans. Potential rivals include McCain of Arizona and former New York Mayor Rudolph Giuliani.

There has also been an undercurrent of concern among Christian conservatives, particularly in the vital South, rooted in his Mormon faith. One political operative in South Carolina branded the religion a "cult."

"His religion is a significant problem because many evangelical Christians do not believe that Mormons are Christians," Rothenberg said. "To the extent that we have controversial religions in this country, LDS (Latter Day Saints) is one of them."

Democrats pounced on the announcement, accusing Romney of abandoning the state.

"For the past 16 years of Republican rule in this state there hasn't been one Republican governor with any long term commitment to Massachusetts," said Phil Johnston, chairman of the Massachusetts Democratic Party.

Former Gov. William Weld, now a candidate for governor in New York, left in 1997 to pursue a job as US ambassador to Mexico. Former Gov. Paul Cellucci resigned in 2001 to become U.S. ambassador to Canada. His replacement, Lt. Gov. Jane Swift, decided against running in 2002 to make way for Romney.