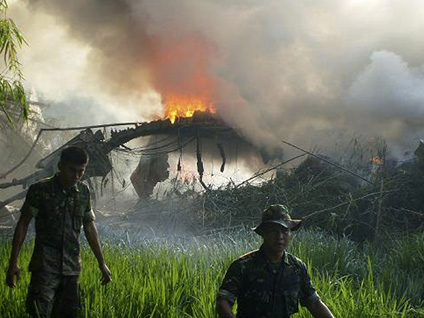 In a career that has lasted more than 40 years, Ron Howard has made a smooth transition from child actor to Academy Award-winning director and producer. His latest film is an epic western called "The Missing."

Howard visited The Early Show to discuss the film.

Howard teams up once again with Brian Grazer ("A Beautiful Mind") for the action-filled suspense thriller starring Tommy Lee Jones and Cate Blanchett.

"'The Missing' features great characters, flawed men and women, who demonstrate enormous courage when they are confronted by an unspeakable horror," says Howard. "It's a story of healing and reconciliation that also has the twists and turns of a thriller. I wasn't looking to merely exercise an old genre, but rather to tell a story that was relatable on a human level and exciting and suspenseful - but that still treated the period in an authentic way."

The film is set in the lawless wilderness of the American Southwest in 1885. It tells the story of Maggie Gilkeson (Blanchett) and her estranged father (Jones) and how they are reunited by a terrifying crisis.

One of Howard's boldest gambles in film is said to be the use of Chiricahua, a dialect of the Apache language (with subtitles) against a backdrop of palpable action.

The actors went beyond the rudiments of Chiricahua to learn many of its subtleties. "One of the great joys for me was how intriguing and entertaining the culture is and how that comes across in the language," says Howard. "Much of the humor in the film comes in the interactions between Jones and Kayitah (Jay Tavare) and the Apaches talking about the white folks. They are famous for their dry sense of humor. It's quite an amazing culture."