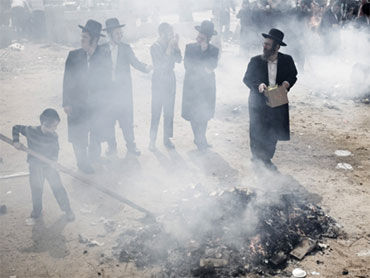 Nearly one out of every two Israelis thinks the country's international standing is poor following Israel's most serious crisis with the United States in decades, according to a poll published Monday on the eve of the Passover holiday.

As Jews around the world were making last-minute preparations for the spring festival - which marks the biblical story of the Hebrews' exodus from Egypt - a poll in the Maariv daily showed increasing concern following the open rift between the governments of the world's two largest Jewish centers.

The U.S. and Israel are at odds over Israeli construction in east Jerusalem, the section of the holy city claimed by the Palestinians. The U.S. is demanding that Israel halt building to facilitate peace talks. Israel says it can build anywhere in the city.

Israeli Pols Rally Around Netanyahu
Analysis: Netanyahu Can't Have it All
U.S.-Israeli Talks End without Accord
U.S., Israel Struggle to Repair Breach

Asked how they would define Israel's international standing, only 14 percent of Israelis said it was good, 37 percent called it reasonable and more than 48 percent called it bad. The TNS/Teleseker survey questioned 500 people and had a margin of error of 4.4 percentage points.

Israel has been under fire internationally since last winter's Gaza war, with a U.N. commission accusing it of war crimes. Israel's relations with allies such as Turkey, Britain and Australia have also faltered.

Relations with the U.S. administration has reached such a low point, said an editorial in the daily Haaretz, that Washington has demanded written Israeli commitments, since "the spoken word has no meaning."

The poll came as Israelis were cleaning their houses, cars and offices, and cooking furiously to get ready for the weeklong holiday, in which leavened bread is forbidden and unleavened bread called matzah is eaten instead.

The holiday begins Monday night with a traditional seder meal. Extended families typically gather and retell the story of the exodus.

The biblical story recounts that God killed the first-born of Egypt after the pharaoh refused to release the children of Israel from bondage, but "passed over" the houses of the Hebrews.

After that divine blow, the pharaoh gave in and let the Hebrews go. They were then given the Ten Commandments at Mount Sinai and wandered in the desert for 40 years before arriving in the Land of Israel, according to the Bible.

The tradition of eating matzah comes from the Bible's account that the Jews left Egypt in such a hurry that there was no time to allow the bread to rise. It is also considered the bread of the poor, meant to remind Jews of their ancestors' hardships. Leavened bread is banned and burned ceremonially before the holiday starts.

Though only about a quarter of Israel's Jews are Orthodox, most do not eat bread during Passover and hold the traditional meal on the first night of the holiday, according to surveys.

President Obama plans to host a seder at the White House, attended by a group of Jewish aides and other close friends.

The Maariv poll showed that more than 46 percent of Israelis still support a peace deal with the Palestinians that includes the return of almost all of the war-won territory in the West Bank.

Just under 39 percent said they were opposed to such a deal and 15 percent did not respond.

On Sunday, Israel said it was imposing a closure on the West Bank as a security measure for the weeklong holiday. The routine measure, which was to begin at midnight, bars almost all Palestinians from entering Israel.

At the height of Israeli-Palestinian fighting last decade a Palestinian suicide bomber blew himself up at a hotel seder in 2002, killing some 30 people.