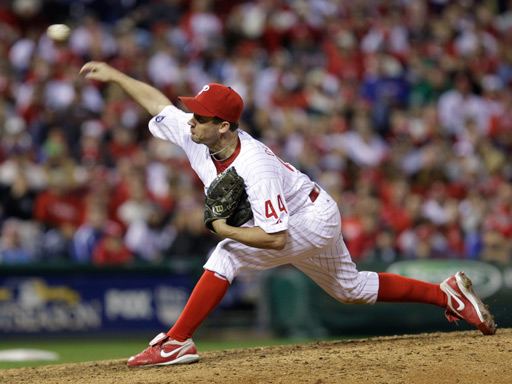 (CBS/AP) ARLINGTON, Texas - The Texas Rangers agreed to a minor league deal with free-agent pitcher Roy Oswalt, expecting the three-time All-Star to join their rotation within a few weeks.

Assuming Oswalt passes a physical Thursday, he is expected to go to Triple-A Round Rock and make his first start Saturday.

"He's been throwing for quite a while now, he feels good about where he is," Rangers president Nolan Ryan said. "I think he's been away long enough that he's excited about coming to the Rangers and getting back to pitching on a regular basis."

The deal, worth $4 million if he joins the team by July 1, was announced in the middle of the Rangers' game Tuesday night against Seattle. Oswalt would be able to earn as much as $1 million more based on the number of starts he makes.

CBSSports.com's Scott Miller says the deal speaks to Oswalt's desire to win a World Series and to his affinity for Nolan Ryan: Oswalt had better offers on the table from the Dodgers, Phillies and Cardinals, according to a source with knowledge of the talks.

"He's motivated. He's a prideful guy, he's in very good shape," general manager Jon Daniels said. "I think he's got something to prove, but I think the bigger thing is he wants to win. ... I think Nolan undersold his relationship (with Oswalt) a little bit. I think that was very important. And the way our roster is constructed, and our chance to win in Texas was big for him."

Oswalt was interested in joining the two-time defending American League champions during the offseason, but the Rangers were then set with their starting rotation.

The Rangers signed Japanese star Yu Darvish in January, a month after C.J. Wilson left in free agency. Plus, the Rangers had already decided to move hard-throwing Feliz from the bullpen into the starting rotation.

But Feliz was put on the 15-day disabled list May 21 with right elbow inflammation and is not even expected to pick up a baseball again until late June. Scott Feldman, a 17-game winner as a starter in 2009 but who has since been primarily a long reliever, made his second start in Feliz's spot Tuesday night.

Oswalt is expected to drive to Texas on Thursday for his physical. If everything goes well, he will then go to Round Rock for the first of several minor league starts, though Daniels wouldn't say how many the team expected that to be.

Several teams had interest in Oswalt during the winter and in recent weeks. He had decided to wait until the right situation for him.

During his 10 seasons with the Houston Astros, Oswalt had connections with Ryan, the Hall of Fame pitcher who played and worked for both teams.

Oswalt had two stints on the disabled list last season because of lower back inflammation. He went 9-10 with a 3.69 ERA in 23 starts for the Phillies. His 139 innings pitched were his lowest total since 2003.

The Rangers have strong connections with the doctor who has worked on Oswalt's back.

In eight career starts at Rangers Ballpark, Oswalt is 2-5 with a 4.78 ERA. He lost his last five starts there, but those were against the power-packed Texas lineup that would now be playing behind him.

Oswalt last pitched on the road against the Rangers on June 27, 2010, a night when slugger Josh Hamilton hit a homer several rows into the upper deck in right-center field way above the Texas bullpen. The drive was measured at 490 feet, the longest home run ever hit at Rangers Ballpark.

Hamilton, talking before the game, said Oswalt is a good pitcher that would be a good mix with the Rangers.

The deal with Oswalt came on the same day the Phillies and AL West rival Los Angeles Angels put their ace pitchers on the disabled list.

"It was a complete coincidence," said Daniels, adding the Rangers and Oswalt had reached an agreement on basic terms of his deal two days earlier.

The Phillies put two-time Cy Young winner Roy Halladay on the disabled list and he'll be out of the rotation for six to eight weeks because of a strained right shoulder. Angels starter Jered Weaver was put on the DL with a lower-back injury, likely forcing last season's AL Cy Young runner-up to miss at least two starts.