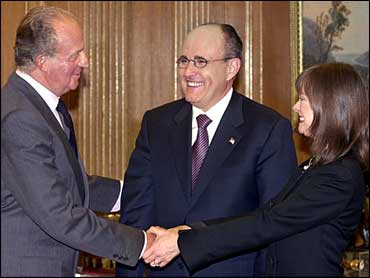 Spokeswoman Sunny Mindel said Giuliani proposed Nov. 24 to Nathan, his companion of more than two years, during a business trip to Paris. Mindel would not discuss details about the proposal or disclose when and where the wedding would take place.

New York's Daily News says the two will tie the knot this spring.

Giuliani gave Nathan an oval Ceylon sapphire, set in platinum and surrounded by 10 diamonds, published reports say. Some estimates put the cost of the ring at $50,000, the New York Post reports in its Saturday editions.

The proposal came five months after the 58-year-old ex-mayor finalized his divorce from Donna Hanover following 20 years of marriage. The divorce settlement called for Giuliani to pay Hanover more than $6.8 million.

The couple has two teenage children, Andrew and Caroline. Under the divorce settlement, Hanover has residential custody and final decision-making authority for the children.

Giuliani's first marriage, to his second cousin Regina Peruggi, lasted about 14 years. It was annulled by the Catholic Church because the couple had not obtained a church dispensation required when second cousins marry.

Peruggi, who heads the Central Park Conservancy, has said she and Giuliani "have a good relationship" and are "good friends."

Nathan, a registered nurse, divorced wallpaper salesman Bruce Nathan in 1992. They have a teenage daughter.

Giuliani and Nathan began appearing in public together more than two years ago.