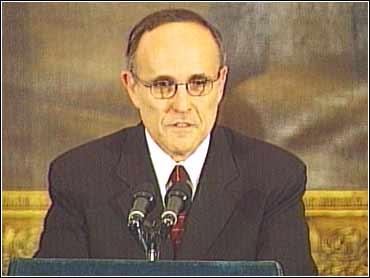 Gische ruled that Nathan could not enter the Upper East Side mansion or its surrounding grounds while the Giuliani children continue to live there as a family.

Hanover, 51, and Giuliani, 56 continue to reside at Gracie Mansion with their two children, Andrew, 15 and Caroline, 11. Hanover sleeps in the master bedroom while Giuliani sleeps in a guest room.

Giuliani had argued that parts of the 200-year-old four-story house were public and that Nathan should have been able to attend functions there. Hanover maintained it was a private home.

The judge also tossed out the mayor's second attempt to obtain a gag order in the increasingly acrimonious divorce case.