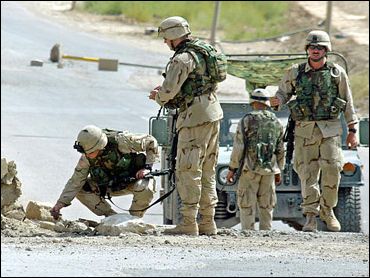 Defense Secretary Donald H. Rumsfeld on Wednesday rejected the "widely held impression that regime loyalists are operating freely" in Iraq, and said large portions of the country are stable.

"The problem is real, but it is being dealt with in an orderly and forceful fashion by coalition forces," he said.

In testimony before the Senate Armed Services Committee, Rumsfeld said the U.S. Army's 3rd Infantry Division, which played a central role in capturing Baghdad in April, is beginning to withdraw from Iraq, and the entire unit will be back in the United States by September.

Rumsfeld said there are now 148,000 American troops in Iraq. He did not say whether the 3rd Infantry Division would be replaced by another U.S. unit, although he said he expects thousands of international soldiers to begin operating in Iraq by late summer or early fall.