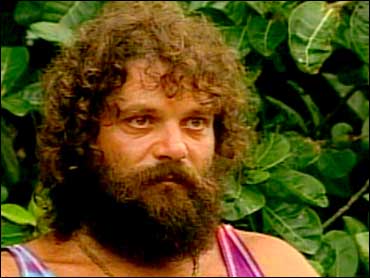 America's favorite pirate was given the heave-ho on Thursday night's "Survivor: Pearl Islands." but for undisclosed reasons, Rupert Boneham is not available to appear in The Early Show studio this Friday morning.

While CBS will not confirm his whereabouts, various online sources suggest Rupert may be on location for next season's "Survivor: All-Stars."

Rupert did, however, give CBS an exclusive interview soon after his flame was doused.

Holding an alligator he says, "From the time I made my audition tape, I believed in my heart it was my time to win."

When I heard there was a pirate theme on "Survivor" seven, I fully believed that 400 years ago, I was one of the pirates out here. The treasure I was never able to go back for.

At the beginning of the reality show, he said, "This is definitely a pirate adventure."

"My tribe saw me as Blackbeard," Rupert says, "We were going to cut my hair and beard. And I was going to be Blackbeard."

Remembering the first days, he says, "After two days, my pants have still not dried. That second day was probably the hardest day ever. I actually begged for a dress.

"After I made that dress, Burton and Shawn and Michelle had a hey day with me," he continues.

Some of the comments? From Burton: "Dude, whatever you do, say no to crack."

Rupert admits, "I did not like the first part of the game. It was my hardest time ever."

Shawn also had something to say, when Rupert was sawing: "Hey look at this guy. Mr. Sawer. Oh sexy, sexy, you gonna have slots on the side."

About them, Rupert says, "They wanted the power. Making fun of me in front of others was their downfall."

But not all was bad for him. He says, "The one saving grace was, I had the ocean. I honestly loved going fishing. I wasn't the greatest of shots when I first started. But I could still bring a sack of fish home."

Rupert says, "I know I was bringing enough food home that when my tribe found the treasure, they were pissed."

Looking back, he notes, "The hardest was being away from my wife and kid and the next was being around people I could not trust."

People like Jon, who on the reality show said, "Everybody's got a price and everybody's gotta pay because the million-dollar man always gets his way."

Rupert says, "I try very hard every day to show trust and compassion in hopes that they will learn.I tried to play this game with honesty and it was not returned."

Reflecting on the tribal council, Rupert says, "I could not believe I would be voted out. I thought there was no way in the world that could happen."

He recalls the moment: "So we start voting. And I believe that it's Darrah. The first three votes were two for Darrah and one for Jon. Then the next vote is for Rupert. And I'm thinking,'Could this be/' And then the second vote for Rupert and a third and I just put my head down and thought 'Oh my God. This is the end.'"

So Rupert gets voted out.

While he didn't win the grand prize, Rupert does credit the show with helping him kick a 30-year smoking habit. Had he won the million dollars, Rupert hoped to buy a Pearl Island of his own.

Here is a recap of Thursday's show:

Burton and Jon hatched a plan to topple the tribe's de facto leader, Rupert. They recruited the women of the Morgan tribe to join in a new alliance against the 39-year-old Indianapolis native, and succeeded in eliminating him from the competition. Rupert, a mentor for troubled teens, looked both enraged and bewildered as his torch was extinguished at tribal council.

Burton and John planned their ambitious coup while on a trip to fetch water. Then, while Rupert was fishing and Sandra and Christa were collecting lemons, they persuaded the other castaways to comply.

Lillian and Burton prevailed in the reward challenge, which involved completing an obstacle course aboard a simulated pirate ship. Burton opted to relinquish his prize to Jon, but Lil chose to claim her reward. Lil and Jon then spent the afternoon sailing on a catamaran and filling their stomachs with pizza and beer.

The immunity challenge required the survivors to fire darts at a colored target. Burton, expertly wielding a blowgun, eliminated the other players from the contest and won immunity.

At tribal council, Sandra praised Rupert's fishing abilities, saying that the tribe couldn't exist without him, but the other castaways clearly disagreed. In a revealing vote, Rupert was voted off and became the second member of the jury.

"I always get hurt trusting people," he admitted after his dismissal.