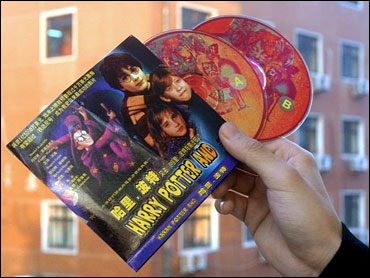 The Bush administration on Monday targeted China, Russia and 10 other nations for extra scrutiny in the piracy of American movies, music, computer programs and other copyrighted materials.

The 12 nations were put on a "priority watch list" in the area of copyright piracy, which costs the American industry billions of dollars in lost sales annually.

"We must defend ideas, inventions and creativity from rip-off artists and thieves," U.S. Trade Representative Susan C. Schwab said in a statement accompanying this year's report.

The administration earlier this month announced that it was filing two new trade cases against China before the World Trade Organization. One of those cases charged that China was lax in enforcing its laws on protecting American copyrights and patents.

The annual report, known as a "Special 301 Report," for the section of U.S. trade law that it covers, said that China has a special stake in upgrading its protection of intellectual property rights, given that its companies will be threatened by rampant copyright piracy as they increase their own innovation.

For Russia, the report said the United States will be closely watching to see how Russia fulfills the commitments it made to upgrading copyright protection as part of a U.S.-Russia accord reached last year which was seen as a key milestone in Russia's efforts to join the World Trade Organization.

In addition to Russia and China, the 10 countries placed on the priority watch list were Argentina, Chile, Egypt, India, Israel, Lebanon, Thailand, Turkey, Ukraine and Venezuela.

In elevating Thailand to the priority watch list, the administration said it was concerned by a range of issues including what an administration statement called a "deteriorating protection for patents and copyrights."