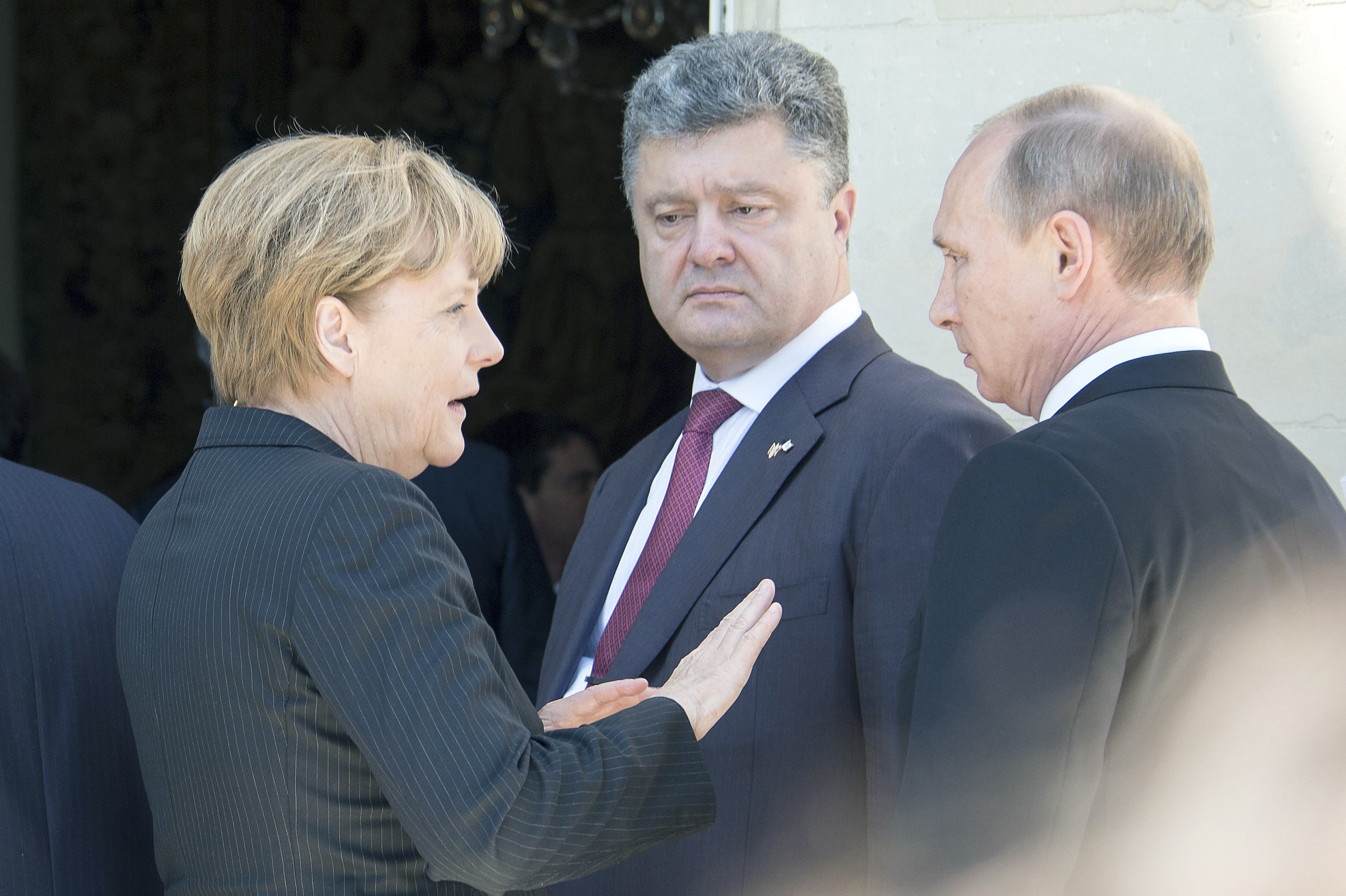 OUISTREHAM, France -- Russian President Vladimir Putin on Friday spoke for the first time with Ukraine's president-elect, praising his intention to end the violence that has engulfed eastern Ukraine and urging an immediate cease-fire.

Speaking to reporters in Normandy on the 70th anniversary of D-Day in remarks televised live on Russian television, Putin said he expects Petro Poroshenko, who is to be sworn for office on Saturday, to show "good will" and "state wisdom."

Putin also said that Moscow is ready for constructive discussion with Ukraine on settling its gas debt to Russia.

He said that he and Poroshenko met for 15 minutes to discuss the main issues related to settling the crisis.

"I can only welcome Mr. Poroshenko's position that the bloodshed in eastern Ukraine must be stopped immediately," Putin said, adding that Poroshenko briefly told him about his initiatives intended to end hostilities.

The pair's brief meeting took place at a chateau in northern France's Benouville, on the sidelines of ceremonies honoring the bravery of those who battled for Europe's peace during World War II.

The Russian president said he liked Poroshenko's approach, but added that he will be waiting for the Ukrainian leader to deliver it in detail to the nation.

Putin has denied claims by Ukraine and the West that Russia has fomented the rebellion in eastern Ukraine. He insisted that Poroshenko needs to speak directly to the representatives of the east.

"It's not Russia and Ukraine that need to be parties to the negotiations, as Russia isn't a party to the conflict. It should be the authorities in Kiev and supporters of federalization in the east," he said.

Poroshenko, speaking to journalists in Normandy, said that he expected Moscow to quickly recognize his election, according to the Interfax news agency.

Poroshenko is expected to detail his peace plan, which he said would include an amnesty and an offer of early regional elections, following Saturday's inauguration.

The meeting between Putin and Poroshenko came on the same day that Putin spoke with President Obama, who had been keeping the Russian leader at arm's length over the Ukrainian crisis that has rekindled Cold War-era tensions.

Putin said he and Mr. Obama spoke twice Friday, and their conversation was "quite substantive."

Putin, who was frozen out of G-7 talks Thursday in Brussels, appeared to be moving incrementally back into the fold of the West following his first direct talks with the man elected to lead Ukraine after the previous pro-Kremlin president was ousted in what Putin has called a coup.

In their eagerly anticipated contact, Putin and Poroshenko discussed how Russia could recognize the Ukrainian elections, said an official at French President Francois Hollande's office, who spoke anonymously because he was not authorized to speak publicly.

The French official said their 15-minute discussion "included ways to de-escalate, including the manner in which Moscow could recognize Poroshenko's election, realizing that Putin is sending an ambassador to Kiev tomorrow."

Outside the building where world leaders met for lunch, reporters saw an animated conversation lasting about a minute which also included German Chancellor Angela Merkel, who at a much more public commemoration at Sword Beach appeared to shuttle between the men.

Putin's spokesman Dmitry Peskov said that Putin and Poroshenko also "confirmed that there is no alternative to settling the situation by peaceful political means."

In recent weeks, Ukrainian officials say more than 200 people have died - a figure which can't be independently confirmed - in fighting between Ukrainian government troops and pro-Russian rebels. Insurgents in eastern Ukraine declared their regions independent and have asked to join Russia, but the Kremlin has ignored their appeal.

Candy magnate Poroshenko, who is to be sworn in as Ukraine's next president on Saturday, has promised a comprehensive plan to put an end to the hostilities in the east as soon as he assumes office.

Putin held his first face-to-face meetings with Western leaders in France this week since pro-European protesters pushed out Ukraine's Russia-friendly president in February, Russia annexed the Crimean Peninsula, and the U.S. and EU imposed sanctions in response.

In the private conversation with Merkel, German government spokesman Christiane Wirtz said that the German chancellor "took the opportunity to remind Russia again of its great responsibility" and said that following the presidential election in Ukraine, the priority needs to be a "stabilization of the situation, in particular in eastern Ukraine."

Mr. Obama and Western allies opened a pathway for Russia to ease tensions in Ukraine on Thursday but pointedly warned Moscow it could face new sanctions within weeks if Putin fails to go along. The leaders said the Russian president could avoid tougher penalties in part by recognizing the legitimacy of the new Ukrainian government and ending support for an insurgency in eastern cities that is widely believed to be backed by the Kremlin.

There was no mention of rolling back Russia's annexation of the Ukrainian region of Crimea, which precipitated the European crisis.

Mr. Obama told reporters Thursday that he would tell Putin that he has a new path to engage with Ukraine with Poroshenko.

"If he does not, if he continues a strategy of undermining the sovereignty of Ukraine, then we have no choice but to respond" with more sanctions, Mr. Obama said.

Mr. Obama, who said he has a "businesslike" relationship with Putin, expressed hope that the Russian leader is "moving in a new direction" on Ukraine since he didn't immediately denounce Poroshenko's election on May 25. "But I think we have to see what he does and not what he says," Mr. Obama said.

The D-Day anniversary - a time when the U.S., Britain and Russia were allied against Germany - marked the best opportunity for the leaders to meet since the Ukraine crisis erupted. Merkel's key role appeared to endure through the introduction of the Sword Beach ceremony in Ouistreham, in an extraordinarily symbolic sign of Germany's changed role in Europe.

In Ukraine, at least 15 pro-Russian rebels were killed Thursday in clashes with government troops at a border crossing with Russia, an aide to the Ukrainian interior minister said.

Speaking on a television show, Anton Herashchenko said armed men came from Russia in trucks and an infantry vehicle and tried to cross the border at the village of Marynivka in eastern Ukraine, and were supported by 100 rebels from the Ukrainian side. His report of casualties could not be confirmed independently.

Following the clash, Ukraine's government ordered the closing of parts of the border with Russia, including the Marynivka crossing, in an attempt to prevent armed men from infiltrating into its territory. The Russian Foreign Ministry said it was "outraged" by this move.