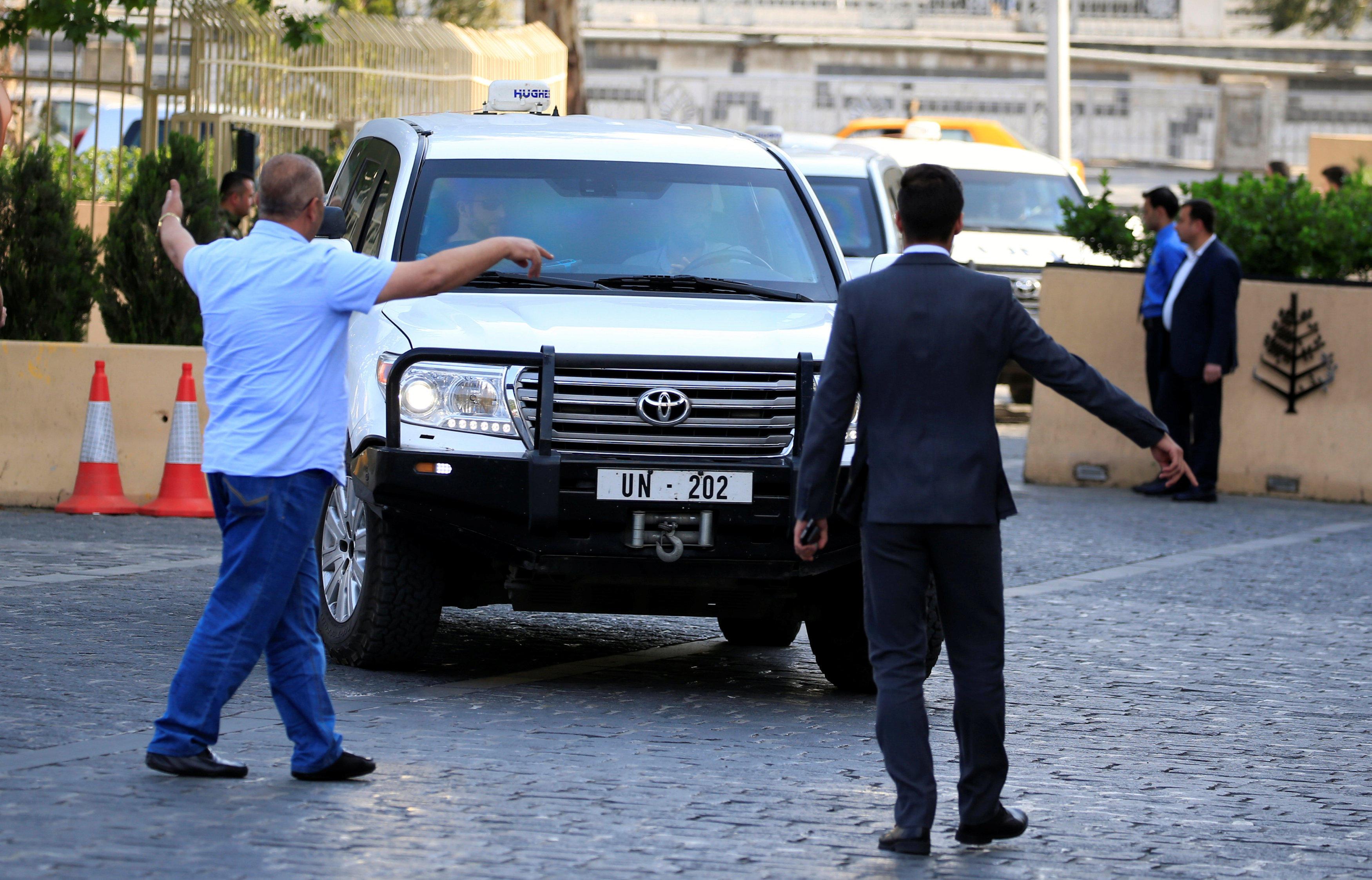 A team of international inspectors who arrived Saturday in the Syrian capital have not yet been permitted by Russian and Syrian authorities to access the site of an alleged chemical weapons attack, the director of the global chemical weapons watchdog agency said Monday.

"The Syrian and the Russian officials who participated in the preparatory meetings in Damascus have informed the FFM (Fact Finding Mission) Team that there were still pending security issues to be worked out before any deployment could take place," Ahmet Üzümcü, director general of the Organization for the Prohibition of Chemical Weapons (OPCW) told the group's Executive Council at an emergency meeting Monday in The Hague, Netherlands.

Üzümcü added that, "in the meantime" the Syrian government had offered the OPCW the opportunity to interview 22 "witnesses who could be brought to Damascus."

Üzümcü confirmed that the team had arrived in Damascus but not yet reached the area of the Douma suburb where an April 7 bombardment left at least 40 people dead. The U.S., Britain and France say Syrian leader Bashar Assad used a combination of chlorine gas and a nerve agent to poison his own people in the attack, and the three nations launched missile strikes on Friday targeting alleged chemical weapons sites in response.

Russia has denied blocking the OPCW team access to the Douma attack site, and dismissed an allegation from Britain that it was doing so, "the latest conjecture of our British colleagues."

Russian Deputy Foreign Minister Sergei Ryabkov was quoted early Monday as saying the mission wasn't allowed access because it hadn't secured an approval of the U.N. Department for Safety and Security. Later, however, as the United Nations secretary-general's spokesman said all necessary approvals for the mission to Douma had been granted, Russian Deputy Ambassador to the U.N. Dmitry Polyanskiy said Ryabkov had been misquoted earlier.

Earlier, Russian officials had suggested the inspectors couldn't go to Douma due to security concerns caused by the U.S. and allied strikes early Saturday morning in Syria. Polyanskiy endorsed that reasoning in a tweet, saying "all obstacles" to the mission "might come as a result of the US-UK-FR aggressive action."

The OPCW is an independent international organization which works in conjunction with the United Nations, but is governed by its own Executive Council.

Britain's representative to the OPCW rebutted the Russian claims, saying the Fact Finding Mission had already been cleared by the U.N. to visit Douma. He also called Russia's claim that the Western attack on alleged chemical weapons sites was impeding access, nonsensical.

Days ago, Russia said it was certain OPCW inspectors would find no evidence of chemical weapons use in Douma when they arrived.

On Monday, Russian officials accused the U.S. of trying to "undermine the  credibility" of the OPCW mission before inspectors reach the site. Earlier the U.S. representative to the watchdog organization said Russia may have tampered with evidence in Douma, according to the Reuters news agency.

"I can guarantee that Russia has not tampered with the site," Russian Foreign Minister Sergey Lavrov said Monday on the BBC's Hardtalk program. He also said the only evidence of a chemical attack by Syrian forces that the U.S. and its allies had offered was based "on media reports and social media."

Western nations, including the U.S., the Netherlands, Britain and France all demanded the OPCW team be given immediate, unfettered access to the site outside Damascus.

Syria and Russia have both repeatedly denied that any chemical attack even occurred in Douma, and Russian officials have even accused Britain of staging it. A British official at the OPCW meeting in The Hague, Netherlands, on Monday dismissed that allegation as "ludicrous."

After what President Donald Trump said were "precision strikes" on several sites vital to the Syrian chemical weapons program, Syrian leader Bashar al-Assad has appeared defiant, and even confident.

CBS News correspondent Seth Doane is in Damascus, where hundreds of Syrians have filled public squares on multiple occasions since the U.S. and allied missile strikes, chanting their support for Assad.

Appearing on state television over the weekend, Assad appeared relaxed and confident -- and for good reason, explained Doane; the missile strikes will do nothing to alter the course of the Syrian civil war, which Assad is winning with help from his Russian backers.

The Trump administration insists its mission in Syria is to defeat ISIS, and that the sole purpose of the late Friday night missile attack was to inhibit future chemical weapons attacks by Assad's regime.

The U.S. is also planning new sanctions against Russia, targeting entities accused of enabling Assad to use chemical weapons against his own people.

Meanwhile at United Nations headquarters, the U.S., U.K. and France began negotiations Monday to try to reach consensus in the Security Council on a new resolution. The draft, obtained by CBS News, calls for an investigation that would assign blame for the attack, and for the delivery of humanitarian aid and a ceasefire. The allies are hoping to craft something that Russia might not block, CBS News' Pamela Falk reports.

France's Ambassador Francois Delattre told reporters the draft resolution has, "a clear goal... to restart a collective action to deal with the chemical dossier to protect civilians, to work towards a political settlement."