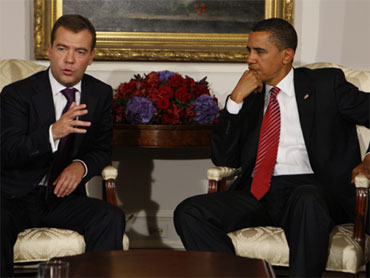 Giving some ground on a top priority of President Barack Obama, Russian President Dmitry Medvedev said Wednesday that sanctions are rarely productive but he opened the door to tougher ones to halt Iran's suspected nuclear weapons program.

"In some cases, sanctions are inevitable," the Russian leader said after he and Obama held talks on the sidelines of the U.N. General Assembly meetings.

Negotiations are scheduled for Oct. 1 between Iran and a group of six nations, including the U.S. and Russia, over its nuclear ambitions. Obama wants to pursue tougher sanctions if those meetings yield nothing. And yet Russia, which has close economic ties with Tehran, has stood in the way of stronger action against Iran in the past.

That made Medvedev's admittedly muted support for sanctions bigger news, and something that pleased the White House.

"Unfortunately, Iran has been violating too many of its international commitments," Obama said. "What we've discussed is how we can move in a positive direction that can resolve a potential crisis."

He and Medvedev share the goal of allowing Iran to pursue peaceful nuclear energy, but not nuclear weapons, Obama said. "This should be resolved diplomatically and I am on record as being committed to negotiate with Iran in a serious fashion to resolve this issue."

However, if Iran does not respond during negotiations, "serious additional sanctions remain a possibility," Obama said.

Medvedev said Russia and the U.S. could help ensure success by providing incentives for Iran to comply. He did not elaborate.

Before the meetings, Russian news agencies had cited an official in Medvedev's delegation in New York as saying Russia does not rule out new sanctions.

For its part, Russia got some good news last week when Obama announced his decision to scrap a plan for a new U.S. missile defense shield in Eastern Europe that deeply angered the Kremlin. Obama has emphatically denied that the missile defense change had anything to do with trying to get better cooperation from Russia on Iran, and Moscow had not until now appeared to be moving closer to the U.S. position on Iran in response.

Secretary of State Hillary Rodham Clinton was meeting Wednesday with her counterparts from Russia, China, Britain, France and Germany to prepare for the Oct. 1 meeting in Geneva with Iran. And White House press secretary Robert Gibbs said Obama as well as aides were spending considerable time this week, in New York and later in Pittsburgh at another international meeting, on the issue of Iran.

"This is a topic that comes up in virtually every conversation that he has," Gibbs said.

On Thursday, as his last act at the U.N., Obama was to chair a Security Council meeting on curbing the spread of nuclear weapons that is largely aimed at Iran.

In his speech Wednesday to the U.N. General Assembly, Obama singled out both Iran and North Korea, which has made more progress than Iran in becoming a nuclear power, as countries that now are at a crossroads.

"Those nations that refuse to live up to their obligations must face consequences," Obama said.