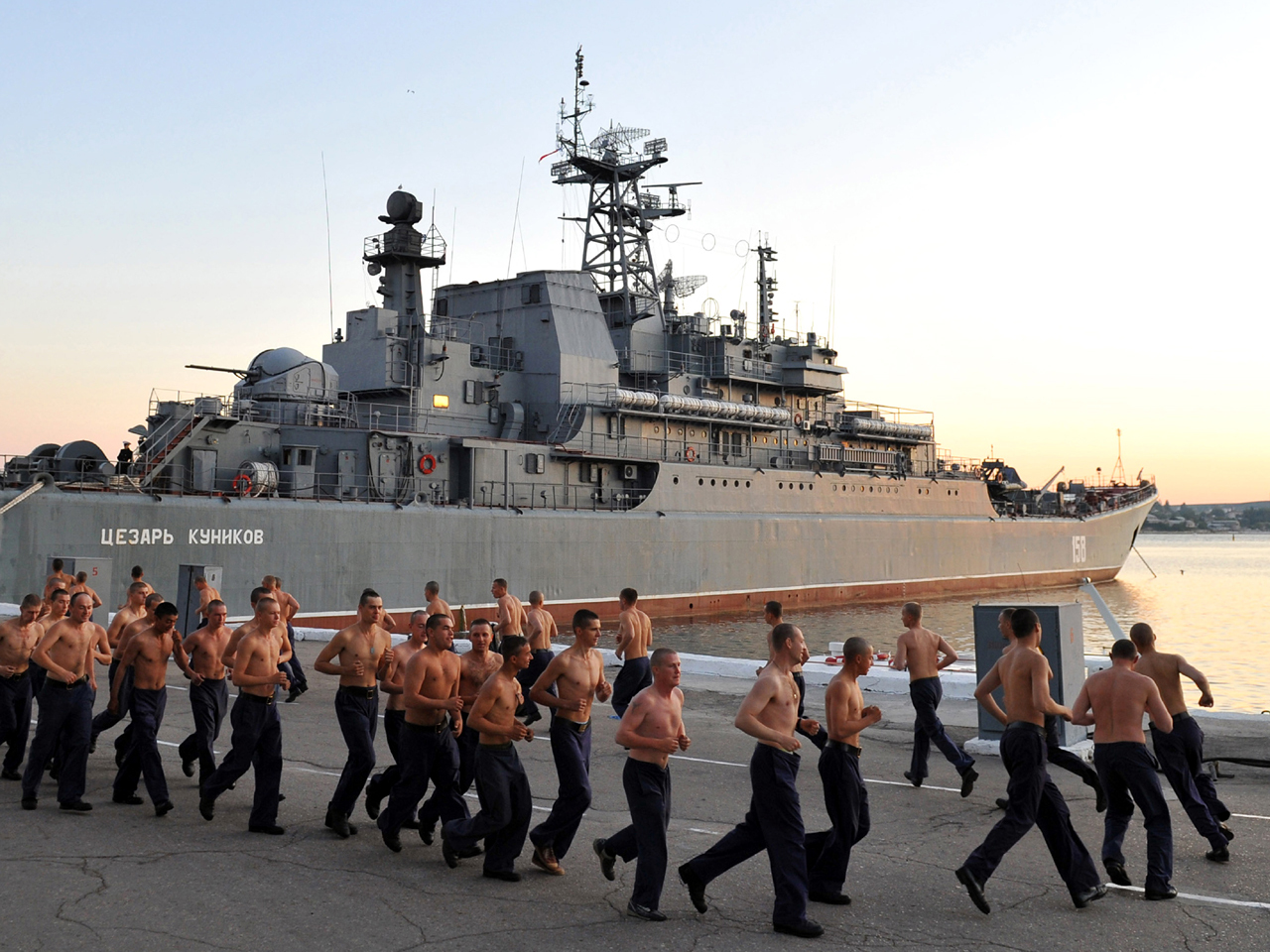 (CBS/AP) MOSCOW - Three Russian navy ships are completing preparations to sail to Syria with a unit of marines on a mission to protect Russian citizens and the nation's base there, CBS News has confirmed. The deployment appears to reflect Moscow's growing concern about Syrian President Bashar Assad's future.

CBS News senior national security correspondent David Martin reports that two of the vessels are small, slow Russian amphibious ships which have been loading "material" believed to be small arms and ammunition at ports in the Black Sea. They have not yet left port and it is unclear whether troops will be on them.

The Russians say the shipments are intended to beef up security at their base at Tartus and there is no reason to doubt that, Martin reports. There have been protests at Tartus and Russian citizens have been threatened.

The third ship is a Dutch freighter called the MV Alead, which is carrying MI-25 attack helicopters, Martin reports. It will eventually add to Syrian firepower, but there is no evidence that these helicopters are being rushed to Syria to shore up Assad.

Each ship is capable of carrying up to 300 marines and a dozen tanks, according to Russian media reports. That would make it the largest known Russian troop deployment to Syria, signaling that Moscow is becoming increasingly uneasy about Syria's slide toward civil war.

Interfax also quoted a deputy Russian air force chief as saying that Russia will give the necessary protection to its citizens in Syria.

"We must protect our citizens," Maj.-Gen. Vladimir Gradusov was quoted as saying. "We won't abandon the Russians and will evacuate them from the conflict zone, if necessary."

Asked whether the air force would provide air support for the navy squadron, Gradusov said they will act on orders.

The Defense Ministry had no immediate comment, and an official at the Black Sea fleet declined to comment.

Asked if the Pentagon is concerned about the plan, officials in Washington said it depends on the mission. They had no comment on the stated goal of protecting Russian citizens and the Russian military position there, something the U.S. would do in a foreign country if in a similar situation.

"I think we'd leave it to the Russian Ministry of Defense to speak to their naval movements and their national security decision-making process," said Capt. John Kirby, a Pentagon spokesman, adding that it's not the business of the U.S. Defense Department to "endorse or disapprove of an internal mission like that."

What would greatly concern the U.S., he said, is if the Russian naval ships were taking weapons or sending people to support the Assad regime in its crackdown.

"The secretary of defense (Leon Panetta) remains concerned about any efforts by external countries or external organizations to supply lethal arms to the Syrian regime so that they can turn around and use those to kill their own people," Kirby said.

Tartus is Russia's only naval base outside the former Soviet Union, serving Russian navy ships on missions to the Mediterranean and hosting an unspecified number of military personnel.

Russian officials have said that other Russian navy ships that have called at Tartus this year also had marines on board, but it has remained unclear whether they rotated the troops at Tartus or simply protected the ships during their mission and returned home.

Russia also has an unspecified number of military advisers teaching Syrians how to use Russian weapons, which make up the bulk of Syrian arsenals.

Syria is Russia's last remaining ally in the Middle East, and has been a major customer of Soviet and Russian weapons industries for the last four decades, acquiring billions of dollars worth of combat jets, helicopters, missiles, armored vehicles and other military gear.

Russia has shielded Assad's regime from international sanctions over its violent crackdown on protests. Moscow also has continued to provide Syria with arms, despite Western calls for a halt in supplies.

U.S. Secretary of State Hillary Rodham Clinton issued a harsh reprimand of Russia last week, when she said that Moscow "dramatically" escalated the crisis in Syria by sending attack helicopters there. The State Department acknowledged later the helicopters she accused Moscow of sending were actually refurbished ones already owned by the Assad regime, but Russia was clearly annoyed, and the spat further fueled tensions ahead of President Barack Obama's meeting with Russian President Vladimir Putin on the sidelines of the G-20 summit in Mexico on Monday.

Opposition groups say more than 14,000 people have been killed since the Syrian uprising began in March 2011 with mostly peaceful protests against Assad's autocratic regime. But a ferocious government crackdown led many to take up arms, and the conflict is now an armed insurgency.

Russia has criticized Assad for slow reforms and heavy-handed use of force, but has strongly opposed any sanctions or foreign interference in Syrian affairs.