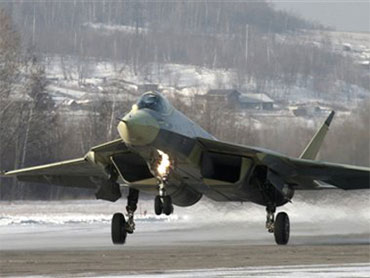 The Sukhoi T-50's flight comes nearly two decades after the first prototype of the U.S. F-22 Raptor took to the air, and Russian officials said it will take another five years for the new jet to enter service. Still, the flight marked a major step in Russia's efforts to burnish the faded glory of its aviation industries and strengthen a beleaguered military.

The sleek twin-engined jet closely resembling the Raptor flew for 47-minutes from an airfield at Sukhoi's production plant in the Far Eastern city of Komsomolsk-on-Amur on Friday. Development of the so-called fifth-generation fighter has been veiled in secrecy and no images of it had been released before the flight.

Russian Prime Minister Vladimir Putin hailed the flight as a "big step forward," but admitted that "a lot remains to be done in terms of engines and armament."

"The T-50 should offer the Russian Air Force a significant boost in its capabilities and ensure that it remains one of the best equipped air forces in the world," he told The Associated Press by e-mail.

Caffrey said the new fighter will attract many foreign customers. "For those countries that don't traditionally purchase military equipment from the U.S. it will be the only fifth generation aircraft available," he said.

The NPO Saturn company said in a statement that the jet has new engines, but military analysts suggested that they were a slightly modernized version of the Soviet-era engine powering the Su-27 family of fighters.

"It's a humbug," said independent military analyst Pavel Felgenhauer. "It's just a prototype lacking new engines and a new radar. It takes new materials to build a fifth-generation fighter, and Russia lacks them."

Putin said Friday the first batch of new fighters is set to enter an Air Force evaluation unit in 2013 and serial production is set to begin in 2015.

Caffrey said the task looks "very challenging, given the amount of new technology that is being incorporated into the new aircraft."

Russian military analysts were also skeptical, pointing at a history of delays in the program and other Russian weapons projects.

"The schedule will likely be pushed back as usual," said Alexander Konovalov, the head of the Moscow-based Institute of Strategic Assessment, an independent think tank.

Russia's prospective Bulava intercontinental ballistic missile has failed in at least eight of its 12 test launches, dealing a blow to Russia's hopes of making it a cornerstone of its nuclear arsenal. Officials have blamed the failures on manufacturing flaws resulting from post-Soviet industrial degradation.

Felgenhauer and other observers said the fighter program, which depends on hundreds of subcontractors, has been dogged by similar problems.

Russian officials have said the new fighter, like the Raptor, will have supersonic cruising speed and stealth capabilities. Its pilot, Sergei Bogdan, said in televised remarks that it was easy and pleasant to fly.

While officials saw the new fighter as essential, some analysts said the country has more pressing needs.

"There is no mission and no adversary for such plane," Konovalov said, adding that the Russian military lacks a modern communications system and satellite navigation. "It would be more expedient to fit modern avionics to older generation jets."

The U.S. administration decided to quit buying the F-22 Raptor, the world's most expensive fighter jet at more than $140 million apiece, effectively capping its production at the 186 already ordered.