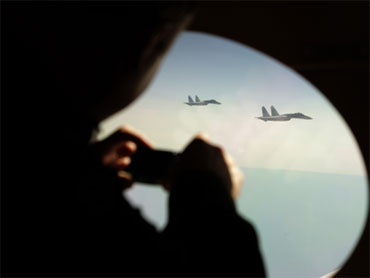 In a historic first for Cold War adversaries, U.S., Canadian and Russian military officers directed fighter jets and ground controllers to test how well they could track an international terrorist hijacking over the Pacific Ocean.

A chartered American jet code-named Fencing 1220 sent a mock distress signal shortly after taking off from Anchorage, Alaska, on Sunday, triggering a pursuit by at least seven fighters and a flurry of radio and telephone calls between military and civilian officials on both sides of the Pacific.

The Associated Press had exclusive access to Fencing 1220, a plush executive-style Gulfstream whose passengers included a Russian Air Force colonel and a senior commander of the North American Aerospace Defense Command, the joint U.S.-Canadian command that patrols the skies over North America.

Their goal: To ensure that two militaries still distrustful of each other can work effectively tackling a terror threat that worries both nations.

One question that arose Sunday was just how much information they need - from the ground, from the fighters, from the hijacked pilots and from the terrorists - and whether fewer, simpler messages might be better than the flood of communication the exercise generated.

Canadian Forces Col. Todd Balfe, the deputy commander of NORAD's Alaska region, acknowledged it may seem "incongruous" that the exercise was taking place amid tension between his country and Russia over recent Russian bomber flights probing the northern boundaries of Canadian airspace. But with al Qaeda at the front of North American minds and Russia dealing with threats from Chechen rebels, terrorism transcends national boundaries, and exercises like this could lay the foundation for cooperating on other issues as well, Balfe said.

"So we'll start out with this mission, and if that leads into other missions, for example, probing of air spaces, well, that would be a great thing as well," he said.

Even veteran officers aboard the Gulfstream were struck by the unprecedented cooperation the exercise required and the breathtaking sight of fighter jets so near that the pilots' helmets were clearly silhouetted against the bright blue sky.

"I'm kind of in awe," said U.S. Army Maj. Michael Humphreys, the senior American officer on Fencing 1220 and a spokesman for NORAD. "It was a remarkably well-planned and well-executed exercise."

It is only half over. The plane will fly back to Alaska later this week, again pursued by fighter jets and tracked by controllers on the ground and in the air.

Russian Air Force Col. Alexander Vasiliev said he knew the day would come when the former Cold War enemies would work in concert, but "he never thought it would be him sitting on the aircraft," his translator said. Vasiliev declined to be quoted directly, saying he would leave that to a Russian spokesman at a news conference planned later in the week.

The intricate exercise began about 10 minutes after the Gulfstream took off from Alaska. Its civilian pilots sent an agreed-upon digital distress code, 5475, to civilian air traffic controllers in the U.S. to signal that the plane had been "hijacked."

Ben Rhodes, one of the pilots, followed up with a voice radio call: "Fencing 1220 squawking 5475 for the exercise."

NORAD then dispatched two F-22s and an E-3 Sentry - an airborne surveillance and command post - to shadow the plane.

The Gulfstream was still over Alaska at about 38,000 feet (11,500 meters) when the angular, silver F-22s drew alongside, about 10 minutes after the hijack signal. They edged to within 500 feet (150 meters) and after about 30 minutes, they turned back to refuel and didn't return.

On the ground and in the air, commanders at NORAD headquarters at Peterson Air Force Base, Colorado, and civilian aviation officials in Alaska were communicating with their Russian counterparts. About two hours after the F-22s fell back, while the Gulfstream was over the Pacific, NORAD officers aboard the E-3 Sentry radioed their counterparts on a Russian surveillance and command post plane that Fencing 1220 was theirs to follow.

Two Russian Su-27 fighters painted pale blue and white soon pulled up from behind the Gulfstream and hovered off its right side, red stars clearly visible on their wings and twin tails. They shadowed the Gulfstream for about 90 minutes before banking sharply to the left and peeling away.

Three other Russian fighters, a MiG-31 and two Su-27s, later shadowed the Gulfstream during the 7½-hour flight. All the fighters were unarmed, a condition of the exercise.

The scene aboard Fencing 1220 was a dramatic contrast to the ominous threats and bluster that marked U.S.-Soviet relations for most of the last half of the 20th century. One of the lowest points came in 1983, when the Soviet air force shot down a Korean Air Lines jumbo jet, killing 269 people. The jet had strayed far off course near the USSR's Pacific coast and was brought down near Sakhalin Island, well south of the route Fencing 1220 took.

Aboard the Gulfstream, Balfe and Vasiliev chatted amiably about the planes they flew and their families. The radio sometimes carried the voices of Russian officers speaking heavily accented English, asking questions or delivering route instructions.

"To see those Russian fighters pull up right on time, to hear the Russians (talking on the radio), it's just incredible," the U.S. Army's Humphreys said.