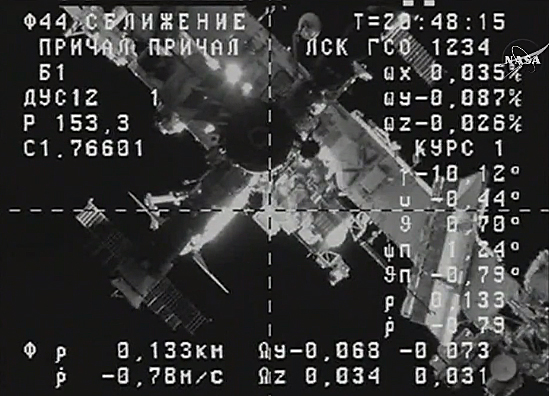 Capping a two-day rendezvous, an automated Russian Progress supply ship loaded with more than 3 tons of propellant, crew supplies and equipment glided to a smooth docking at the International Space Station Saturday, the second of three rapid-fire cargo delivery missions in just 15 days.

With cosmonaut Yuri Malenchenko standing by to take over by remote control in case of any trouble, the Progress MS-02/63P spacecraft lined up with the Zvezda module's aft port and moved in for a problem-free docking at 1:58 p.m EDT (GMT-4). A few minutes later, hooks and latches engaged to lock the ship in place.

It was the second flight of an MS-series Progress, featuring upgraded communications and navigation gear. With the spacecraft's successful launch and rendezvous, the Russians are expected to press ahead with plans to launch the first MS-series Soyuz crew ferry craft in June.

The Progress linkup came just one week after the arrival of an Orbital ATK Cygnus cargo ship last Saturday carrying 1,713 pounds of science gear to the station, 2,511 pounds of crew supplies, 2,442 pounds of station hardware and another 550 pounds of computer and spacewalk equipment.

If all goes well, SpaceX will launch a Dragon cargo ship from Cape Canaveral next Friday to deliver another 3.5 tons of cargo, including an inflatable compartment that will be attached to the station's Tranquility module for long-duration tests.