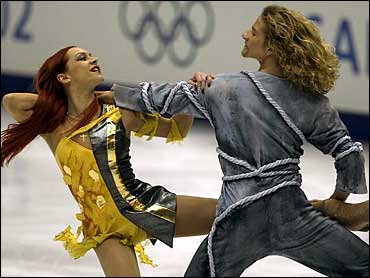 The reputed Russian mobster who allegedly helped fix two figure skating results at the Salt Lake City Olympics formally announced at a hearing in a Venice, Italy, prison that he will fight extradition to the United States, an Italian judge said.

Asked at the closed-door hearing in Santa Maria Maggiore prison if would consent to extradition, Alimzhan Tokhtakhounov "said no," Judge Giannicolo Rodighiero, who led the hour-long session, told reporters after it was over.

Defense lawyer Luca Saldarelli quoted his client as saying: "I want to have the complete extradition procedure under Italian law."

By refusing to be extradited, a suspect in Italy is entitled to have a formal legal process, including hearings, that could take weeks.

"He said he's absolutely not guilty of having anything to do with the Olympics," the lawyers said.

U.S. authorities have 40 days from the time of the suspect's arrest on July 31 in Venice to relay a formal extradition request to Italian authorities. Judge Rodighiero said as of Tuesday, no request had arrived at the Italian Justice Ministry.

Those medals awarded at the Salt Lake City Winter Olympics could be annulled if claims that organized crime helped fix the results were proven, International Olympic Committee president Jacques Rogge earlier this month.

Tokhtakhounov was arrested in Venice by Italian police after a U.S. criminal complaint was filed. Italian police said the Russian may have been in contact with at least six Olympic judges in a plot to fix medals at the Salt Lake City Winter Games.

Asked last week, after their first meeting, what his client had to say in general about the case, Saldarelli replied: "He said it's a farce."

Tokhtakhounov is accused of scheming to get a French judge to vote for the Russian pairs team, and a Russian judge to vote in turn for the French ice dancing team, according to the criminal complaint filed in Manhattan federal court. Both teams won gold medals.

On Monday, in France, Olympic ice dance champion Marina Anissina acknowledged she had talked "from time to time" with Tokhtakhounov. She and partner Gwendal Peirzerat won the event.

She insisted that knowing him had nothing to do with her gold medal.

The French couple, along with the Russian pairs champions, Elena Berezhnaya and Anton Sikharulidze, spoke at a news conference to defend themselves against accusations contained in a U.S. criminal complaint that their figure skating competitions were fixed.

The skaters on the Russian pairs team have said they planned to sue U.S. television networks for using pictures of them in connection with coverage of the reputed mobster. Anton Sikharulidze and Yelena Berezhnaya spoke on Russian television channels, but it was not immediately clear which American networks the pair planned to sue.

"I saw our pictures appearing on the screen while they were talking about some kind of Russian mafia," Sikharulidze said. "Together with people who are working with us, we are preparing to sue the television channels."

The Russian Olympic Committee said it would meet with lawyers in support of the lawsuits.

"These events resemble the theater of the absurd," spokesman Gennady Shvets said, according to the Interfax news agency. "It's clearly a dirty and foolish insinuation that undermines respect for Russian sportsmen."

The judging scandal resulted in a duplicate set of gold medals awarded to the Canadian team that finished second to the Russians.

Saldarelli described Tokhtakhounov as "a friend of some great Russian athletes, but not Olympians. He has a passion for soccer, being an ex-player."

A week after the pairs competition, France's Marina Anissina and Gwendal Peizerat won gold in the ice dancing. However, the Russian judge voted for the second-place Russians — indicating the scheme wasn't carried out the way prosecutors believe it was planned.

Italian police said Tokhtakhounov had a phone conversation with a French man, identified on the tape as "Chevalier," after the Russians won the gold in pairs.

Police say that during wiretaps in the Russian mafia investigation, they uncovered details of the alleged ice-skating fix.