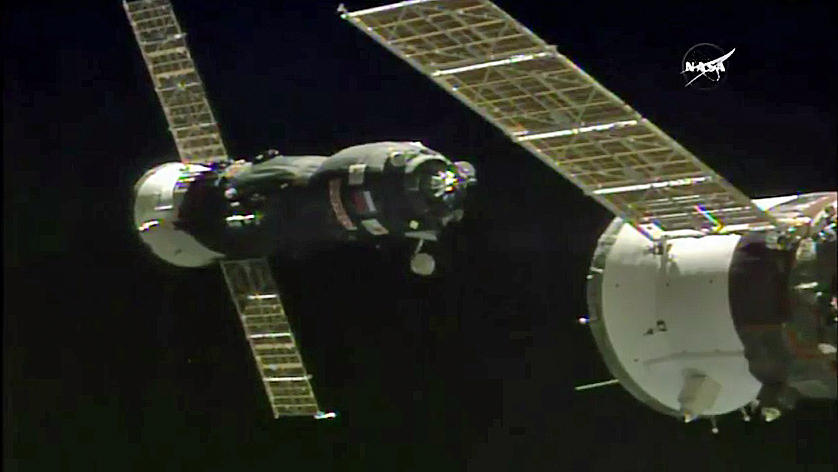 One day after a SpaceX cargo ship reached the International Space Station, a Russian Progress freighter carrying another 2.9 tons of equipment and supplies glided to a smooth docking Friday to wrap-up a two-day rendezvous.

Completing an automated approach to the station, the Progress MS-05/66P spacecraft’s docking probe engaged the capture mechanism of the Russian Pirs module at 3:30 a.m. EST as the two spacecraft were passing 250 miles above the South Pacific Ocean east of New Zealand.

Hooks and latches then engaged, pulling the spacecraft in and locking it in place. Hatch opening was expected later Friday, after leak checks to verify a tight seal.

The Progress was launched from the Baikonur Cosmodrome in Kazakhstan Wednesday carrying 1,763 pounds of propellant, 926 pounds of water, 51 pounds of oxygen and 2,900 pounds of food, crew supplies and other dry goods, including a Russian spacesuit.

It was the first launch of a Progress since the MS-04/65P supply craft was lost Dec. 1 when the third stage of its Soyuz booster malfunctioned during the climb to space. But it was smooth sailing Wednesday, and the MS-05/66P spacecraft completed a problem-free rendezvous and docking.

The successful flight is expected to clear the way for launch of a Soyuz spacecraft April 20 carrying two fresh crew members -- Fyodor Yurchikhin and Jack Fischer -- to the station using the same upper stage as the Progress vehicles.

An Orbital ATK Cygnus cargo craft is scheduled for launch from the Cape Canaveral Air Force Station on March 19, followed by launch of another Dragon on April 9. The next day, the Soyuz MS-02 ferry ship is expected to bring Sergey Ryzhikov, Andrey Borisenko and Shane Kimbrough back to Earth after 173 days in space.