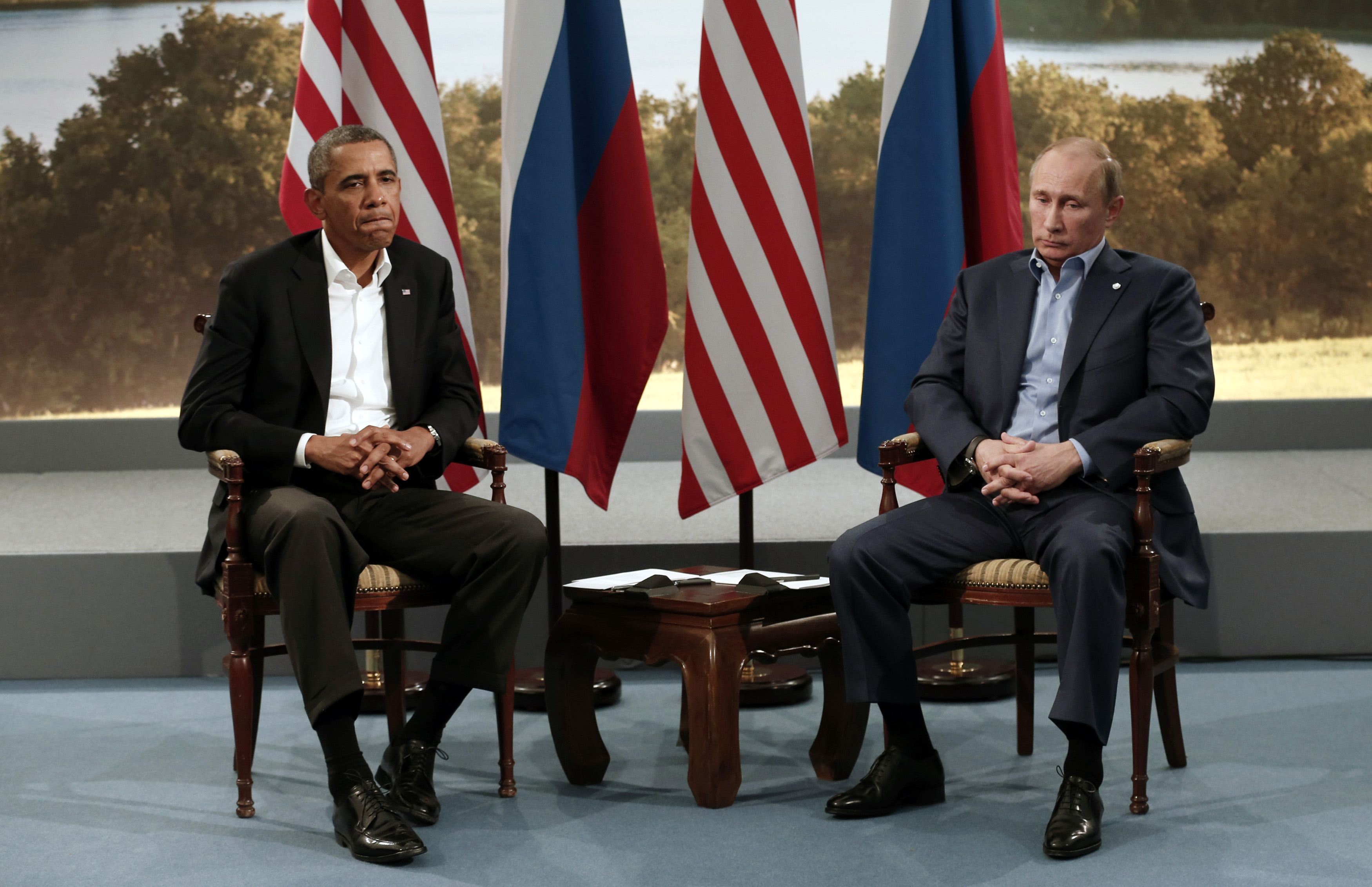 When President Obama meets in Brussels Wednesday with his counterparts from the rest of the G-7 (France, Germany, Italy, the United Kingdom, Japan and Canada), the prime focus will be on their missing partner -- Russia.

This year's G-7 summit was originally scheduled as a G-8 summit in Sochi, Russia, but the annual meeting was moved to Belgium and Russia's membership was revoked after its incursion into Ukraine. The two-day summit is a chance for world leaders to discuss issues like energy and trade, but the majority of the discussion is expected to focus on how to help Ukraine's new government and how to respond should Russia keep up its aggression.

Russia may once again be a part of the G-8 if it regains the trust of other industrialized democracies. But as Mr. Obama said Tuesday, "I think it is fair to say that rebuilding that trust will take quite some time."

The president spoke about the strained relations with Russia at a press conference Tuesday in Warsaw, Poland, after meeting with Polish President Bronislaw Komorowski. His stop in Warsaw kicked off Mr. Obama's four-day, three-country tour through Europe, which includes the G-7 summit as well as a commemoration of the 70th anniversary of the D-Day invasion of Normandy, France. The world's leaders will, in fact, come face to face with Russian President Vladimir Putin at the D-Day commemoration, but before then, his absence is key for the U.S. to advance its aims.

"The things that the American and Europeans need to talk about, they can't talk about with Russia in the room," Willis Sparks of the Eurasia Group told CBS News.

Mr. Obama on Tuesday laid out his aims for the week: "We are going to be prepared for any contingencies that may come up if, in fact, Mr. Putin continues to pursue strategies that destabilize its neighbors," the president said. "Whether it's Ukraine, or any NATO member, or Moldova or others, we want to make sure that we stand with the people of countries that are simply seeking to choose their own destiny."

After a successful presidential election in Ukraine, Russia appears to be making conciliatory gestures with its neighbor. The Russian troops amassed on the Ukrainian border as recently as last week appeared to have largely retreated, while Russia is now engaging in constructive talks over shipping natural gas into Ukraine. And after months of blocking United Nations action on Ukraine, Russia is now calling on the U.N. Security Council to pass a resolution to end the violence in eastern Ukraine.

The change in Russia's approach, however, could make it more challenging for the U.S. and its European allies to agree on the set of carrots and sticks it intends to use to influence or respond to Putin's next move.

"The specter of all these guys wearing ski masks and carrying machine guns [through Eastern Ukraine]... made it easy for the Europeans and the U.S. to coordinate," Sparks said. "Now the Russians are playing a more subtle game."

Because of their stronger economic ties to Russia, the Europeans have less of an appetite for pursuing stronger sanctions against Putin's government. But even putting aside Russia's annexation of Crimea, the U.S. has stressed that Russia could do more to put an end to the violence still plaguing Eastern Ukraine. When Russia called for the U.N. Security Council resolution, State Department spokeswoman Jen Psaki said Russia was being "hypocritical."

"It is hypocritical of the Russian leadership to call for an end to violence and the creation of humanitarian corridors when, at the same time, armed irregular forces are entering Ukraine from Russia, weapons are being brought illegally from Russia into Ukraine, Russian-backed separatists are attacking new targets and holding [European] monitoring teams hostage, and Russia is doing nothing to stop these activities," she said. "So if they are going to call for or would support a reduction in tensions and a de-escalation, it would be more effective for them to end those activities."

Given that tension, it may not be surprising that French President Francois Hollande will host two separate dinners Thursday night for Putin and Mr. Obama, while they are in town with 16 other world leaders for the D-Day commemoration.

Mr. Obama said Tuesday that he's "sure" he'll see Putin and that his attendance at the event is important.

"I think it's important for us to acknowledge the role that Russia played during World War II, and that's part of what Normandy is about," he said.

The president said that if he sees Putin, he will tell him that "he has a choice to make" about whether he exerts his influence to get separatist groups in Eastern Ukraine to stand down.

"I would expect and hope that David Cameron and Francois Hollande would emphasize those same points to him when they meet with him," Mr. Obama said.

Sparks said that it makes sense for Hollande to dine with Mr. Obama and Putin separately.

"It is awkward, but I think that Putin and Obama would probably like to be spared a conversation that really neither of them wants to have," he said. "No good can come out of that conversation at this point."

Ultimately, it will take years to Ukraine to develop the political and economic infrastructure necessary should it aspire to join the European Union, and the U.S. will be keeping an eye on Russia's influence there throughout that process.

Mr. Obama held out hope that the process would go well.

"If, in fact, we can see some responsible behavior by the Russians over the next several months, then I think it is possible for us to try to rebuild some of the trust that's been shattered during this past year," he said.