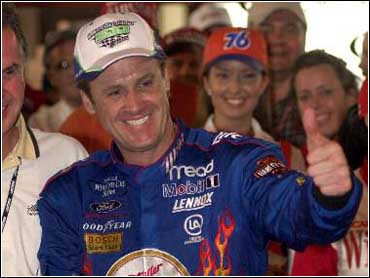 There's a reason Rusty Wallace considers Bristol Motor Speedway his favorite track. No one can beat him there.

Wallace became the first four-time winner of the season Saturday night when he easily won the goracing.com 500. The victory gave him a season-sweep on the 0.533-mile bullring - the first driver to pull off the feat since Dale Earnhardt did it in 1987 - and his ninth career win on the concrete.

"I just love Bristol, it's the track I got my first victory on (in 1986) and I just like the shape of it," he said. "It's the toughest track on the circuit, but for some reason I feel more comfortable here then I do on most tracks."

Wallace, also the winner last week at Michigan, is the first driver this season to win in consecutive weeks. It was his first victory from the pole in eight tries this year and his Ford has led more than twice as many miles as any other driver this season.

"Eight poles, four wins, all these laps led. I just can't get over what a year it's been," he said. "I'm not one to brag about anything, but the one thing I can brag about is our team. I think we are the best team. "

More importantly than any of that, though, is that Wallace closed the gap in the race for the Winston Cup championship.

Wallace came into the race in fifth place in the standings, 352 points behind leader Bobby Labonte. Wallace remained in fifth after the win, but closed the margin to 290 points.

With Labonte finishing 15th, runner-up Dale Jarrett cut his deficit to 91 points with a ninth-place finish.

Wallace was dominant early, leading 134 of the first 146 laps. But Tony Stewart, who like Wallace has lately been one of the superior drivers at Bristol, took the lead after Wallace bobbled a bit on lap 146.

Stewart, who was also battling for his fourth win of the season, held the top spot and the two took turns leading the rest of the night.

Wallace almost cost himself a chance to win on lap 385 when the 10th caution of the night came out. Wallace didn't plan on pitting, but when the rest of the field headed he in, he darted into pit road at the last moment.

The decision to pit, and change tires along with the rest of the leaders, kept him in the race.

But his big break came with 46 laps to gwhen the 13th caution flag came out. He and Stewart were the first two cars into the pits and both took four tires.

Ward Burton took two and exited the pits ahead of both of them. But Wallace had the dominate car and passed Burton for the lead on lap 464.

Stewart got stuck in lapped traffic, and once was even forced up against the wall coming out of turn four, so Wallace was able to cruise to victory. He beat Stewart to the finish line by over two car lengths.

"We definitely were a lot faster than Rusty, we just got held up by some lapped cars," Stewart said. "That's part of this sport and if we had been leading the race and got the jump it would have played into our favor."

Martin, who led 45 laps midway through the race, said he thought he could catch Wallace.

"We could run with them," he said. "I guess he runs good here all the time, but I think he can be beat and he's one of the guys you have to come into the race thinking you have to beat for a chance to win it."

Labonte, trying to overcome past failures at Bristol, had to overcome leg cramps and stiffness to stay in the race.

He radioed his crew around lap 300 asking if there were any relief drivers around the garage area because he said his "neck is stiff, my legs are cramping and the whole left side of my body is numb."

When no driver could be found, Labonte elected to stay in the car even after a near disastrous tap to the rear of his car by Mike Skinner on lap 320.

Labonte was headed into turn four and trying to avoid Bobby Hillin's car as it slid across the track. Skinner rear-ended him and Labonte's car spun sideways, costing him valuable time in the race back to the finish line before the caution. He didn't make it in time and ended up a lap down.

The race was slowed by 13 caution periods that covered 85 laps, making it a regular Bristol race. Th worst of the accidents came on lap 398 when Robert Pressley and Scott Pruett had contact on the track and Pressley's car exploded into a ball of flames.

He was able to escape the car unharmed, but the accident brought the caution flag for a 12-lap delay.

Darrell Waltrip, the winningest driver in Bristol history with 12 victories, ended his run at the track in disappointing fashion by finishing 42nd.

Waltrip, who is retiring at the end of the year, hit the wall on lap 92, tried to fix the damage but called it a night shortly after. He completed just 107 laps, then retreated behind the wall and tearfully embraced his wife, Stevie.

"I was so lucky here for so many years, I guess I'm overdrawn in the luck tank," he said. "I'm disappointed, but that's the fact when you come to Bristol."