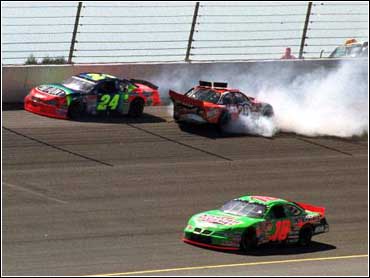 Rusty Wallace's third win of the season was almost upstaged Sunday by another altercation between Jeff Gordon and Tony Stewart.

Wallace, riding with four fresh tires on his Penske Ford, took the lead with 15 laps to go and steadily pulled away from Ricky Rudd's Ford and Bobby Labonte's Pontiac in the Pepsi 400.

"I had a fast car," said Wallace who has won five of his 52 career NASCAR Winston Cup races at Michigan Speedway. "I figured I had a first- or second-place car all day. I knew I'd have to race Ricky Rudd, because he was quicker than me."

Dale Jarret, the series points leader, was fourth and Johnny Benson of nearby Grand Rapids, Mich., was fifth.

For the second straight week, the outcome of the race was almost upstaged by an incident involving Gordon and Stewart.

The brash Stewart, as he did a week earlier at Watkins Glen, took Gordon into a wall, causing serious damage. That time, the two almost got in a fistfight. But it didn't lead to such bad blood on this occassion.

Stewart was running second to Wallace when his car got loose and touched pole-sitter Dale Earnhardt Jr. on lap 37.

Earnhardt Jr. drove on, but Stewart's Pontiac began to swerve badly. The car got sideways between the first and second turn and spun into Gordon, who was trying to get past the trouble on the high side.

Gordon's car slammed into the wall, damaging the front end, and he had to take the multi-colored Chevrolet in to have the brakes repaired.

"I just lost it down there," Stewart said. "We were just racing hard out there. It was my fault. I just got down into one and I don't know why I got loose. I hadn't been loose there all day.

"For some reason, it just got loose that one lap down there and I crashed a bunch of people I didn't mean to crash. It was my fault. I just lost t."

Actually, the only driver he caused to crash was Gordon. But that was enough.

The start of the race had been overshadowed all week by the feud a week earlier between Gordon and Stewart at Watkins Glen. In that race, Stewart caused Gordon to go into the wall while Gordon was trying to pass on an `S' curve. Gordon vowed a payback during a shouting match later in the garage area.

"I'm sure a lot of people were wondering what was going to happen with the 20 and 24," said Gordon, whose car was taken to the garage. "But it had nothing to do with this weekend at all. He was racing hard and it looked like he just got real loose.

"I saw the 20 car wiggle and it looked like it got real sideways."

The race went on for 41 laps while Gordon's crew installed new brakes. He rejoined the race while the leaders still had 119 laps to go, but completed only 141 laps before retiring the car.

Kerry Earnhardt, making his first Winston Cup start, hit the wall on the fourth turn of his sixth lap, bringing out the first of the race's eight caution flags.

"The car was running real loose," he said. "We were just trying to stay out of trouble and bring it in on the first caution. But another car got underneath me on turn 3 and took away my air. I thought I could hang on to it, but I spun out and hit the wall."

Still, it was just the start of a so-so day for all three Earnhardts in this race. Dale Jr., despite starting first, spun onto the infield grass while swerving to avoid Robby Gordon on lap 177 and finished 31st. Their father, The Intimidator himself, finished sixth after taking a provisional to start 37th.

Bill Elliott, on lap 124, went into the wall at the exit of the second turn with a cut right tire. That caution period led to a mass pit stop, with Rudd leading Jeff Burton. Wallace was back in front when they all came out and the caution was lifted.

Rudd and Wallace raced hard around the banked 2-mile speedway for the next few laps, swaping the lead back and forth several times.

It was great entertainment for the sun-drenched fans, yet the race may have hinged on pit strategy.

Wallace went in with 30 laps to go and took on fuel plus four new tires, all in 16.1 seconds. The others waited until lap 173 to make their final pit stop. Rudd, who went in with that group, took on only two new tires both on the right side of the car.

Wallace, who won at Bristol, Tenn. in May and the second Pocono race in July, was running third behind Rudd and Labonte when the spin by Earnhardt Jr. and Robby Gordon brought the caution flag out on ap 177. The difference was that Wallace had the four new tires while the others had taken on just two.

"I didn't think I was going to catch those guys," Wallace said. "But the caution flag came out and they were sitting on two tires. They gambled, but we went for four and ... when they dropped that (restart) flag, the Miller Lite Ford took off like a bullet."

There were 21 lead changes among eight drivers and 12 of the 43 cars failed to finish. There were 38 laps run under the eight cautions.